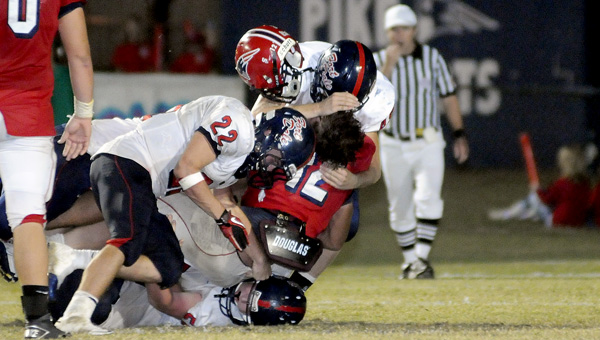 The Patriots of Pike Liberal Arts were a little over eight minutes away from a huge region win at home.

However, in an instant, those hopes were dashed thanks to Fort Dale.

For the third consecutive time in the series, the home team had to watch the visiting team celebrate on its own turf, as the Eagles came into town and snuck away with a last-second victory, winning 27-26.

“This one was tough,” Patriots’ head coach Steven Kilcrease said.

“There were a lot of plays that hurt us (Friday night). We had a lot of miscues, but you have to give Fort Dale credit, they played well throughout the game and made the plays when it mattered.”

This is the first time the Patriots have suffered a defeat twice in a season since 2007.

From the start of the game, things did not go as either Kilcrease or his team had hoped, as Ashton Davis fumbled on the opening kickoff, giving the Eagles the football on the PLAS 34-yard line.

Just four plays later, running back Perry Singleton reached the end zone on a 19-yard run to put the Patriots in an early hole at 7-0.

PLAS again had to overcome fumbles on its first offensive possession, as starting quarterback Blake Floyd lost the football on the first two snaps of the drive.

After a FDA three-and-out, PLAS would find the end zone thanks to 25-yard run by Nick McLaughlin.

A Luke Labrant missed extra point would bring the Patriots to within one, as opposed to tying the game.

The Eagles answered back, thanks to a 25-yard run of their own by quarterback Hunter Armstrong, to give the visitors a 14-6 lead.

With time running out in the first half, the Patriots were threatening to put more points on the board in a drive led by Floyd.

The junior was 3/4 for 40 yards, but PLAS found itself on a fourth and goal situation, and despite McLaughlin’s best efforts, the running back was stopped just inches away from the goal line to keep the eight-point Eagle led going into the break.

After FDA was unable to move the chains to start the second half, on the ensuing punt, Taylor Stevens would get the ball on the Eagles’ 40-yard line and take it all the way to the back of the end zone.

McLaughlin would tie things up at 14-14 after he converted on a rushing two-point attempt.

Again, Armstrong would lead his team to a score, when he rushed for a 44-yard touchdown after facing a fourth-and-three in PLAS territory.

The Patriots would take the ball 56 yards in 10 plays, taking up seven minutes off the clock, however, was unable to score after failing to convert on another four down, this time on the Eagles’ three-yard line.

All hope would not be lost, as the Patriots would score 12 unanswered points when Floyd connected with Sam Carroll on a 25-yard pass and McLaughlin would pickoff an Armstrong pass for a 36-yard interception return for a touchdown.

Labrant missed another extra point after the Carroll touchdown.

McLaughlin’s interception put the Patriots up 26-21 with eight minutes and 25 seconds remaining in the fourth quarter.

The Eagles would have an answer and again it was Armstrong leading the charge.

After being pinned back at their own six-yard line, FDA drove down the field in 11 plays, capping it off with a 20-yard run by Armstrong that found him in the end zone and the Eagles with a come from behind win.

Even though the Patriots had 29 seconds left, it proved to be not enough time, as any late-quarter heroics fell short.

“We got to learn from our mistakes,” Kilcrease said. “And there were a lot of them (Friday night).

“We have to go back to work on Monday, put this game behind us, and work to get better.

“There were a lot of chances for us to win the game. The missed extra points didn’t lose the game for us. The fourth down plays were ones made in a split second decision and I thought Nick got in (before halftime) but that wasn’t the case.”

Overall, the Patriot offense finished with 242 yards, with Floyd finishing 9-of-15 for 136 yards and touchdown and McLaughlin finishing with 100 yards and a score on 16 carries.

The Eagles put up over 100 yards more on offense, finishing with 353, 250 of which came from Armstrong who had 149 on the ground with three touchdowns and 101 through the air.

“This (loss) means we will probably be on the road in the playoffs,” Kilcrease said. “Which is never an easy thing to do.

“Regardless, we have to win the rest of the season out. We have to get better and stayed focused.”