Daleville gets best of PCHS 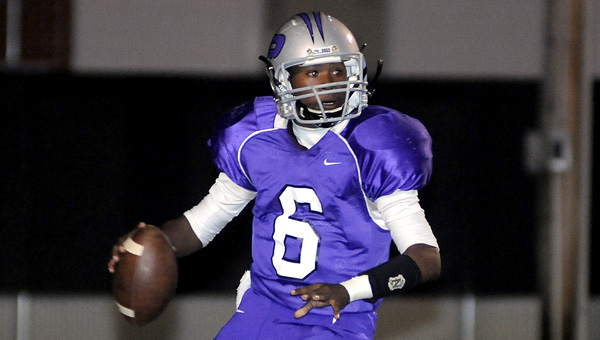 The Pike County Bulldogs can mark this one down as one that got away. After building a 20 -6 first half lead, the Bulldogs saw the lead slip away to the Daleville WarHawks and their running back Brandon Burks.

The Bulldogs, who seemingly were the better team in the first half, drew first blood on their second drive as Jerrelle Bailey found Kendrick Jackson for a 60 plus yard touchdown pass to put the Bulldogs up 7-0.

It was then the defenses turn as Bulldog defensive end Deion Nickson intercepted a A.J. Jones pass returning it all the way for touchdown to put the bulldogs up 13-0.

The Warhawks then answered back with a nine-play scoring drive of their own, capped off with a Burk touchdown run that made the score 14-6.

The Bulldog defense then came back thanks to a Marlon Meadows interception, which set up a 15-yard Tyshin Dawson touchdown run to make it 20-6 Bulldogs heading into halftime.

However, PCHS couldn’t hold onto the lead as the third quarter began as they watched Burks score his second touchdown of the night off a 24-yard run, making the score 20-12.

Then after going three and out on their next drive, the Bulldogs once again watched Burks score another rushing touchdown, his third of the night making the score 20-18.

As if things had not gone bad enough, Bailey then went down with injury that kept him out the rest of the game.

The injury Bailey suffered was a concusion.

After the Bulldogs went three and out on their next possession.

The Warhawks scored another touchdown as A.J. Jones and wide out Chris Stone connected for another six points, giving their team a 24-20 lead.

However, Pike County fought back scoring on a electrifying 20-yard scamper by Stefan Foster with 4:50 left in the game giving the Bulldogs a 27 to 24 lead.

Unfortunately, that was to much time for the Warhawk running back Burk, who after almost being tackled numerous times on a second down play running it all the way to the Pike County eight yard line. Fullback Terrance Flowers then finished the drive with touchdown run of his own putting the Warhawks up for good 30-27.

After the game, a disappointed Bulldog coach Robert Johnson, said he thought his team played hard but just came up short, but he did add, that the teams season was not over and they needed to continue to improve as they get set to play Luverne next week.