Bulldogs hope to down Warhawks 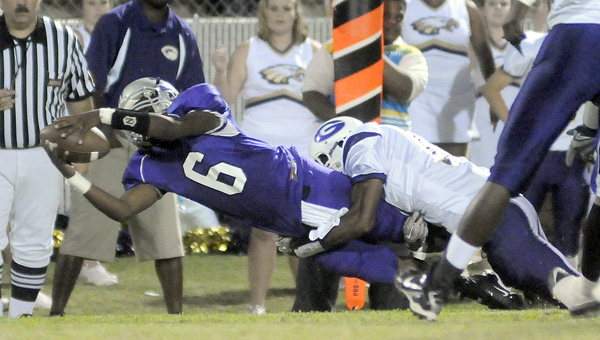 The Bulldog faithful will be out tonight as they pay homage to the senior class at Pike County.

The final regular season home game for the Pike County Bulldogs will not be a walk in the park, as the Daleville Warhawks come into town looking to spoil the fun and get a step closer to the playoffs.

“They’ve got a great team in Daleville,” head coach Robert Johnson said. “Their running back Brandon Burks is a guy who can take it to the house on one play, he is that good.

“Plus their quarterback (Richard Jones) has a great arm and will beat you with it if you stack the line trying to stop (Burks). They have a really good receiver in Christopher Stone as well, so we are really going to have to ready to play on defense.”

Seeing high-powered offenses is nothing new for the Bulldog defense, as PCHS has gone up against Abbeville, Goshen and OPP in three consecutive weeks.

In that stretch, the Bulldogs have gone 2-1 with its only loss of the season coming at home to Goshen.

However, in those three games, PCHS has allowed 108 combined points.

“Our main emphasis is to stop the run, and I think we have done a pretty good job recently,” Johnson said. “But we need to get better at it.

“Daleville has a lot of options offensively – they are going to tough to handle.”

As for the Warhawks themselves, they are chasing the same thing the Bulldogs are, a region title.

Entering Friday night’s game, both teams will have a 5-1 overall record, but PCHS has a one-game lead, as it stands undefeated in region play at 4-0.

DHS 3-1 in region play, with its lone loss coming all the way back in week two, when it was handed a loss to Opp, on the road.

In the most recent meetings between the two teams, the Bulldogs have dominated, winning two-in-a-row, by a combined score of 61-9.

With a win against the 3A Region 2 rival this season, the Bulldogs would get one step closer to its ultimate goal – the post season.

“Our main goal is to make the playoffs,” Johnson said.

“We have put ourselves in good position so far, but we really do control our own destiny at this point. We have won some games that we didn’t play the best in but were fortunate enough to come away with a victory.

“This is a football team that won’t quit and they have showed that all season long,” the coach said.

The Bulldogs will look to show that unwillingness to quit one more time in front of the home crowd, as a senior class that has gone 31-9 in its four seasons will bid farewell to Bulldog Stadium, at least in the regular season.

“These guys have worked hard from moment I arrived here,” Johnson said. “There are a lot of good guys in that group and they all have done a lot for this team. Hopefully, it won’t be the last time they play at home this season.”

PCHS will look to take out DHS for a third-straight season, tonight at Bulldog Stadium, with a kickoff scheduled for 7 p.m.