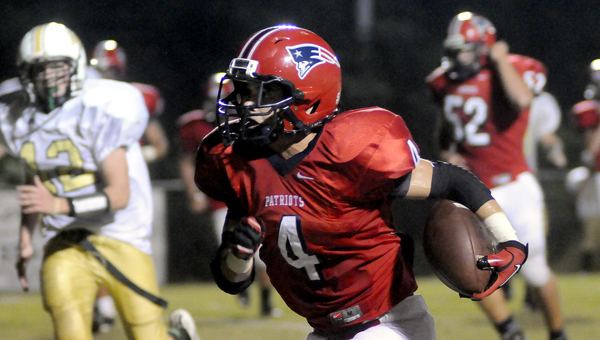 Since falling on the road to Monroe Academy, the Pike Liberal Arts Patriots have dominated the football fields they have played on.

The past two weeks against Ashford Academy and Hooper Academy, PLAS has scored 50 or more points both times and held its opponents to under 10 points, winning by a combined score of 123-15.

However, all that is in the past.

As the Patriots, 4-1, did three weeks ago, the team will again be tested on the road against one of the better schools in the AISA – Prattville Christian.

PLAS head coach Steve Kilcrease knows what is waiting for him and his team in Prattville on Friday.

“Prattville Christian is a good team that has a lot of very good athletes – there’s no doubt about it.

“Our guys have been looking forward to this game for the past two weeks. They know that Prattville is going to be better than what we have seen lately. They knew this was going to be the next big challenge in our season and they have been focused on it.”

Prattville Christian enters with a perfect record at 5-0 in AISA AAA Region 1.

One of those players, J.J. Hudson, is a threat at multiple places on the field.

He also has 205 yards receiving and has taken snaps at quarterback.

Running backs Michael Gregory and Jonathan Pearson have run for 505 and 325 yards respectively, as well.

Hudson will be the Patriots’ main focus though.

“He is a great athlete,” Kilcrease said. “Who can do so many things on the field.

“He has a great arm and has great speed. We haven’t seen an athlete like him this season and I don’t think we are going to see one like him the rest of the season. You can’t simulate what he does on the field in practice.

“Bottom line, we are going to have to stop their running game,” he added.

While the PCA running game has been a force to be reckoned with in 2010, the team’s passing game has, at times, been inconsistent.

The Panthers other senior quarterback, Cam Keiffer, has thrown for 477 yards, however, he has just completed 25 of his 64 passes, 39 percent, while throwing nine interceptions to just two touchdowns.

Every win so far for the Panthers has been by double-digits are more, with the exception of one, last week’s 16-7 win on the road over Lee-Scott.

Defensively, Ray Rudolph leads the team in both tackles, with 42, and sacks, with nine.

As far as the PLAS offense goes against the speedy PCA defense, Kilcrease said his team is going to have the same mentality it has had in the five previous games.

“We are going to do the things that we do best,” the coach said. “And stick to that and see how it goes.

“I think our best defense is going to controlling the football on offense,” he said.

While the Kilcrease said the team has put its only loss of the season behind them, there was one aspect that he believes my benefit his team as it heads into its next challenge Friday night.

“This team is excited for this game,” the coach said. “We want to show how good this team is.

“If the Monroe loss did anything, it helped us get back to us. It brought us back down to earth. Since that game, we have had three really good weeks of practice.

“We are a much better team then we were then,” he added.

The Patriots will look to make it three-straight wins in Prattville Friday night, with a kickoff scheduled for 7 p.m.