Third time the charm for Troy 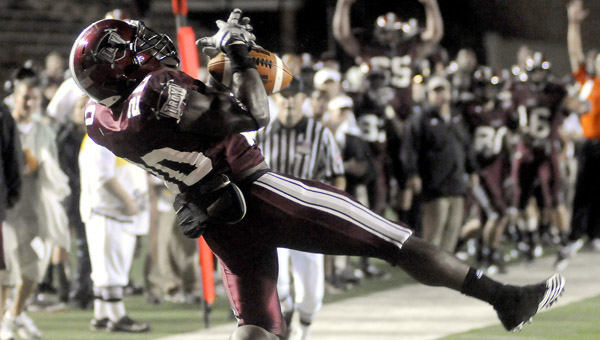 This time, however, the Trojans would have an answer for the fourth quarter blues.

After an Arkansas State touchdown put the Red Wolves up 28-27 with 50 seconds remaining, the Trojan offense took the field for one last attempt to salvage a victory.

And that’s exactly what happened.

Thanks to Corey Robinson, Jerrel Jerigan and Shawn Southward, Troy was able to go 77 yards in 30 seconds, as Jernigan caught two passes for for 40 yards and Southward caught the game-winning pass from 17 yards out to put the team in cardinal ahead for good, 35-28.

“The little wheel route to Southward was a picture of beauty,” Troy head coach Larry Blakeney said with a smile after the nail-biting win.

“It was set up by a great first play though to Jerrel. If you call his number, he is going to make something happen every time,” the coach said about Jernigan. “He is a difference maker.”

Before the jammed packed final minutes both teams were at a stand-still, thanks to an hour and 45 minute weather delay due to lightening, halting play in the second quarter with three minutes and seconds left on the clock.

“I had a lot of time to go over strategy (during the delay),” Blakeney said with a laugh.

“We were just trying to make sure the guys stayed warm and kept their focus. But these guys are men, and we treat them like that.

“They know what is important and they do a good job showing that.” 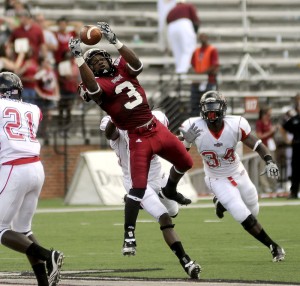 The win improves the Trojans to 2-2 on the season, snapping a two-game losing streak where the Trojans lost by a combined four points.

However, more importantly the victory moves Troy to 1-0 in the Sun Belt, and keeps its 11-game conference winning streak alive.

“I really feel for the guys across the field,” Blakeney said. “And not just because of the past two weeks.

“I got a lot of respect for (ASU head coach) Steve Roberts and his crew – they have a good team over there and they played well (Saturday night).

“We luckily got one,” the coach added.

The win was the Trojans’ fourth in a row over the Red Wolves.

Troy was able to jump out to an early lead just 54 seconds into the game, as the offense drove down the field in three plays, highlighted by a 70-yard pitch and catch by Robinson and Jernigan.

After a ASU touchdown tied things up nearly eight minutes later, Jamie Hampton would find Tebiarus Gill for a three-yard touchdown to give Troy a 14-7 lead going into the second quarter.

After a four minute drive, the Trojans found the end zone again, thanks to a four-yard Chris Anderson run to go up 21-7.

After the ensuing weather delay, both teams would strike before the half, and the Red Wolves would score seven and the Trojans would score three, with the score board reading 24-14 after two quarters. 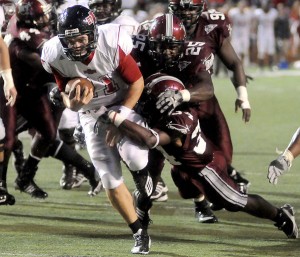 A scoreless third would set up an exciting fourth quarter.

Michael Taylor would put his team up 27-14 with 14 minutes left in the game.

ASU would score 14 points, and taking the lead, before Troy’s final offensive drive would end with the game winning touchdown.

“It was a lot better to be on this end then it did last week against UAB,” Robinson said after the game.

“This was a good win for us. I just wanted to help my team win – I didn’t want to hurt our chances of winning.”

For the second straight game, the red-shirt quarterback eclipsed the 300-yard plateau, as he threw for 316 yards and two touchdowns, completing 18 of his 38 passes.

“I got a lot of play-makers on this team. A lot of guys that can do a lot of good things with the ball, so my job is really easy,” the quarterback said.

One of those play makers is senior wide receiver, Jernigan.

Against the Red Wolves, Jernigan finished with a career high in receiving yards with 209, off of 10 catches.

He also finished with 31 yards rushing.

“We knew we had plenty of time,” he said about the final possession.

Overall, Troy out gained ASU in total yards 505-450, but it was a the turnover battle that proved to be the biggest factor.

The Trojan defensive forced three turnovers, two interceptions and a fumble recovery, while the Red Wolves finished with two turnovers.

“I saw some sparks on defense,” Blakeney said.

“I hope I am seeing what I think I am seeing. If that’s the case, I think we have a chance. Nothing is guaranteed but I am really proud of how the players and the coaches performed (Saturday night),” the coach added.

The Trojans have 10 days off before the next game on the road against conference foe Middle Tennessee.

The game will take place on Oct. 5 and will be nationally televised on ESPN 2.