Patriots lasso Colts on the road 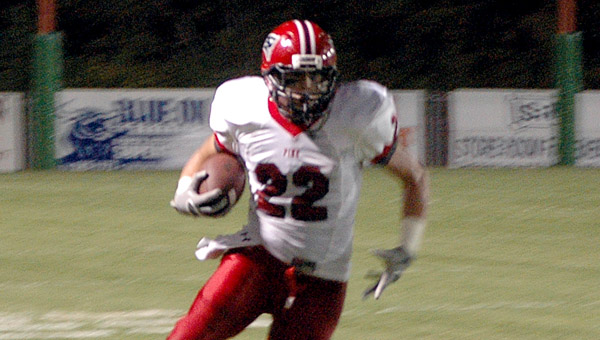 The Patriots of Pike Liberal Arts Patriots came into the game Friday night against the Colts of Hooper Academy riding an impressive win against Ashford Academy.

When the team left Davis Henry Field Friday night, it had another win underneath it’s belt, as the Patriots beat the Colts 54-8, improving its record to 4-1.

During PLAS’ first possession, the team drove the ball down the field scoring on a six-yard Blake Floyd touchdown pass as the quarterback connected with tight end Sam Carroll.

The Patriots would continue that streak on their next three possessions.

Floyd would hit wide receiver Evan Strother for a 37-yard touchdown just a minute after its first score.

Floyd would call his own number on the next Patriot possession, scoring on a one-yard run, and a blazing punt return down the sidelines by Taylor Stephens, putt PLAS up 28-0 as the first quarter came to an end.

Floyd added extra insurance as he tossed the ball for a 40-yard touchdown pass to Stephens, his second touchdown of the game, taking the score to 34-0 headed into half time.

Floyd ended the half with 200 yards passing, including two passes touchdowns and another rushing touchdown.

Carroll would add his score of the game in the third quarter on a 22-yard touchdown run to put PLAS up 41-0.

PLAS would keep it on the ground throughout the quarter as Kyle Boswell ran in for a score towards the end of the quarter, taking it to 47-0.

The Colts finally answered back seconds later as they scored on a big run and successfully converted a two-point conversion, scoreboard reading 47-8 entering the fourth quarter.

The Patriots took their time in the fourth quarter running the clock down on the ground.

Taylor Renfroe went in for a final score on a hard-nosed 12-yard run, putting the game at 54-8.

As the game clock ran out PLAS finished with 19 first downs, scoring on eight out of their 10 possessions.

The Patriots defense showed up to play only allowing the Colts four first downs and minimal yardage the whole game,

“This was a big win for us (Friday night),” Kilcrease said.

“Everyone got to play and contribute, which is always good to see.”

Next week the Pike Liberal Arts School Patriots will look to make its three wins in a row, as it will hit the road taking on Prattville Christian.

Tennis Classic of Troy gets set