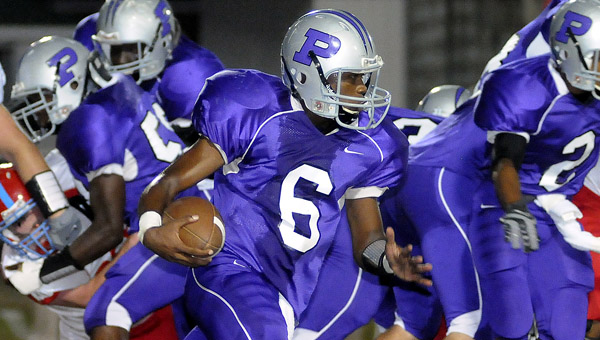 For the Pike County Bulldogs, this season is playing out just as the 2009 season did.

A season ago the Bulldogs finished with a perfect regular season record, and a region crown.

There is one more aspect of last season that PCHS acquired – county bragging rights.

In the newly restarted rivalry between PCHS and Goshen, all that separates the two schools is 22 miles or so.

Last season, it was PCHS who made the trek to the Eagles’ Nest and left with a double-digit victory.

Now, a season later, the Bulldogs will look to make it two in a row in their own backyard, as Goshen will make the thirty-minute drive to Bulldog Stadium.

Even though this is his first season at PCHS, head coach Robert Johnson knows the level of importance the in-county game represents.

“This is a game that is important to a lot of people,” the coach said.

“We have been preparing for it just like any other game, working on the things we know we need to fix before hand.

“But Goshen is a very good team. They have two good running backs, a quarterback who can make good passes and good wide receivers – I’m real impressed with what I have seen,” Johnson added.

The Bulldogs will be going into the game with a lot of confidence on both sides of the ball thanks to its winning performance last time out.

Against then undefeated Abbeville, PCHS scored on its first five possessions, holding a two score lead throughout much of the game, while on defense, the Bulldogs held standout Yellow Jacket running back Andre Kincey to just 55 yards on 16 carries.

However, in today’s game, PCHS will have to find a way to stop GHS’ dual-running attack of Reginald Foster and Marcus Jackson, as the two combined for over 300 yards and five touchdowns on the ground against New Brockton last week in a 33-12 victory.

“We know that they have a great running game,” Johnson said.

“And we know we are going to have to plug up the holes and make sure they don’t get a chance to get out in the open.

“After our game against Abbeville, we have a lot of confidence in our ability to stop the run – more so than we did before,” he said.

Another level of confidence was added because of the Bulldogs’ ability to play strong throughout the whole game, according to the coach.

“That was a major key for us,” Johnson said.

“We hand not done that at all coming in and we knew that if we wanted to get a win, we were going to have to play all four quarters against Abbeville.

“And I think the same holds true for Goshen.”

A big reason why PCHS will enter Bulldog Stadium with a 4-0 record is because of its offense which has put 137 points, a little over 34 points per game, on the board.

At the helm of the offense is first year starting quarterback, Jerrelle Bailey.

The past two games, the senior has combined for 638 yards of total offense, but even with the numbers, the coach said there is a lot more moving the chains then just one player.

“Jerrelle has played very well for us,” Johnson said. “But he is not the only person doing things offensively.

“Our offensive line has done a great job anchoring the offense for us, and so has our running backs.

“This is not a one person offense and I think we have been able to show that,” the coach said