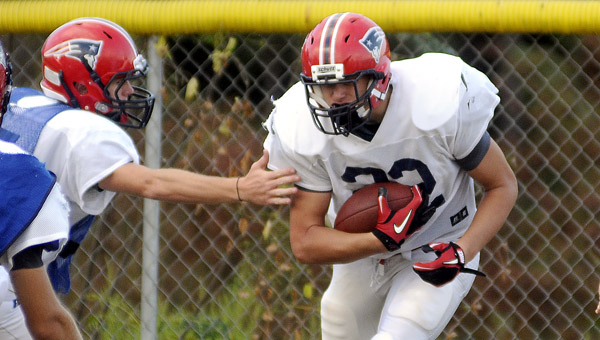 Entering its game against Ashford Academy, there were many questions regarding whether or not the Pike Liberal Arts Patriots would be able to bounce back from its shutout loss to Monroe Academy.

Those questions were answered almost immediately.

It didn’t take long for the Patriots to impose its will against the Falcons on Friday night, as the team scored on its first three possessions, taking a 36-point lead after the first 12 minutes of play.

“We were ready to get back on the field,” head coach Steven Kilcrease said Tuesday during the team’s practice.

“Against Monroe (Academy), we were able to move the ball well, but we couldn’t score and you can’t do that against a good team.

“It was huge for us to be able to move the ball down the field and put points on the board (against Ashford),” the coach added.

Offensively, the Patriots rolled for 437 total yards, while defensively, the home team finished with six sacks, two fumble recoveries and held the Falcons to zero first downs in the second half, and just three overall.

As week five begins, the Patriots again find themselves playing an out of region game, this time against a team it has seen many times before – Hooper Academy.

Hooper comes into the game riding a four-game skid.

The Colts have scored no more than 14 points a game this season while giving up 21 or more points each time out.

So far this season, the team from Hope Hull has been outscored 161-45.

In its most recent loss, Fort Dale cruised to a road victory, defeating Hooper 34-12.

Despite their opponent’s current record, Kilcrease said Hooper’s size is something his team will have to be ready for.

“Hooper is huge,” the coach said. “They are bigger than Monroe.”

“(Colts’ head coach Cody) Keen has had some very good teams in the past and is a good coach himself.

This will be the fifth time the Patriots and the Colts have met on the gridiron since 2004.

In the past four meetings, PLAS has been the superior team, winning each time.

The two squads did not play one another during the 2006 and 2007 seasons, however, the series was renewed in 2008 and 2009, each resulting in a Patriot double-digit victory.

“They are going to be a better test than some of the other teams we have played this season.

“We have been getting better at learning from our mistakes recently, but I would still like us to improve,” he said.

One aspect PLAS was able to get out of the Ashford game, besides a win, was the amount of players who were able to get some game time experience.

“We were able to give a lot of quality reps to a lot of our players,” Kilcrease said. “That was something that was pretty beneficial for us.”

One of those players who got a lot of reps was quarterback Josh Starling, who started his first career game at the position against Ashford.

In that start, the junior finished 3-3 for 126 yards and two touchdowns and also rushed for 14 yards off of one carry.

“It was good to get Josh some quality playing time and I thought he did a good job,” the coach said.

While a win is the main objective for both teams, there is one Patriot who is hoping for a win a little bit more than the rest of his teammates.

A year ago, he was hoping for the exact opposite.

Junior linemen Tanner Free came to PLAS at the beginning of this school year after spending almost his enter scholastic career at Hooper.

Now, he is ready to line up against his old teammates.

“I’m looking forward to it,” Free said with a smile.

“I still talk to a lot of those guys to check in and see how the team is doing.

“This is a game that I have been waiting for. It’s going to be a lot of fun – but we better win,” he added.