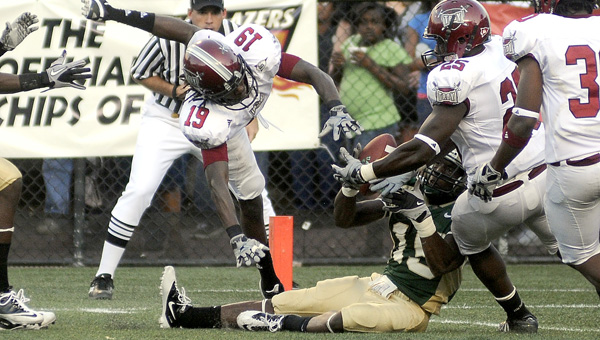 Two days after suffering its second heart-breaking defeat in as many weeks, the Troy Trojans will now begin preparation to put the past behind them and get back on track.

Despite holding a 23-point lead early on, the Trojans were outscored 21-7 in the fourth quarter by their rivals from the north, UAB, with the final touchdown coming on a controversial call as time expired.

At the team’s weekly press conference Monday afternoon, Troy head coach Larry Blakeney described the loss as one ‘that just takes the air out of ya’.

“It was a very tough, tough loss,” Blakeney said.

“It was one of those things you never want to go through – there are only a few losses that stand out like this one.

“I don’t want to take anything away from UAB though, they played well,” he added.

The comeback was the largest the Blazers have ever overcome in the program’s history, and with the win, UAB tied the rivalry series up at 4-4.

It was also the team from Birmingham’s first win of the 2010 season.

“I was taught a long time ago, you don’t cry over spilt milk, and this milk is spilt,” the coach said.

“We gotta beat up football team right now – we are struggling.”

As the Trojans get set to enter Sun Belt play for the first time this season, they are going to do so with several key injuries, as offensive lineman Jacob Creech is listed as doubtful, while fellow linemen Jay Stansberry, Aaron Williams and Mario Addison are listed as questionable for Saturday’s game.

Addison is suffering from a broken left hand, which occurred during the game, and was back in Birmingham on Monday for more tests.

While the team will break a two-week absence from the friendly confines of Veterans Memorial Stadium this weekend, things are not about to get any easier for the Trojans, as Arkansas State rolls into town.

In the all-time series between the two teams, the Red Wolves hold the advantage, winning seven of the 12 matches.

However, Troy has won the last three meetings.

Another noteworthy streak on the line is the Trojans’ 10 consecutive conference wins, but even with all the recent success endured, Blakeney knows of the tough task at hand.

“(ASU) has maybe the best offensive line in our league,” Blakeney said.

“These cats can beat anyone they line up against.

“We’re going to try to get the (Troy) kids going,” he added.

ASU will enter the game with the same record as Troy, at 1-2, but the Red Wolves are 1-1 in conference play thanks to its win over Louisiana-Monroe this past weekend.

“A win is what it is going to take to get us back to having positive feelings,” the coach said. “A win would be big for us.”

Even though entering conference play with a losing record is not what the team had hoped for at the beginning of the season, it is not necessarily a bad thing.

Since the 2004 season, the Trojans have opened Sun Belt play with a 1-2 record four different times.

In three of those four seasons, the Trojans won the conference title.

Now, Troy is looking to make it a fourth time in its “Drive for Five” quest.

“I can’t emphasis enough to the guys how important (the ASU game) is,” quarterback Corey Robinson said. “A lot of the guys have been around longer than me and they know this, but we have to win this game.”

On Monday, it was announced that the red-shirt quarterback was name Co-Offensive Sun Belt Player of the Week, for his 404-yard, two-touchdown performance against the Blazers.

“It’s always good to win stuff like that,” Robinson said about the honor. “But it would have felt a lot better with the win.”