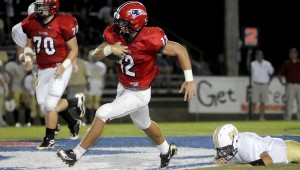 What a difference a week can make.

The Pike Liberal Arts were on the losing end of a blow out against Monroe Academy a week ago, and when it took the field against Ashford Academy Friday night, the Patriots left little doubt that loss was far behind them.

Once PLAS got the ball, the team wasted little time in finding the end zone, setting the tone for the rest of the Homecoming game and cruising to a 66-7 win.

“We were excited to get back on the field,” Patriots head coach Steven Kilcrease said after the win.

“We struggled a lot against a good Monroe Academy team (last Friday) and we really wanted to get back to how we play the game, and I thought we did a good job of that (Friday night).”

The win improved PLAS to 3-1 on the season, while the loss dropped Ashford to 0-4.

After just 10 offensive plays, the Patriots had a 28-0 lead in the first quarter, thanks to two Taylor Stevens rushing scores, and touchdown receptions from Ashton Davis and Evan Strother.

In those four possessions, the Patriots gained 196 yards of offense.

A safety and a 66-yard Taytom Barnes punt return put the team in red, white and blue up by 36 after the first 12 minutes of the game had come to a close.

“I thought we did a good job working on us (Friday night),” Kilcrease said.

“We wanted to fix a lot of the mistakes we made (against Monroe Academy), and I thought we did that.

“We went after the ball hard every play, and we were in position to make plays,” he added.

The lone Ashford score took place in the second quarter, when the Falcons crossed the 50-yard line for the one and only time during the game.

With the Patriots up 36-7 heading in the third quarter, the offensive starters returned to the field for what would be their last plays of the evening.

And like they did earlier in the game, the offense wasted little time finding the end zone.

On the first play of the second half, starting quarterback Josh Starling connected with fellow junior Nick McLaughlin on a 67-yard pass that put another six points on the board.

On the following Patriot possession, the offense took the ball 51 yards, finishing on a 13-yard touchdown run by quarterback Blake Floyd, to put PLAS up 49-7.

A Jacob Watkins safety and touchdown runs by Tyler Rotton and Marcus Stephens put the finishing touches on the big win.

In all, the PLAS offense tallied up 437 yards of offense.

Starling led the way, completing all three of this passes for 126 yards and two touchdowns, while McLaughlin caught one pass for 67 yards and rushed for another 47 on two carries.

Rotton finished with 47 yards and a touchdown as well, on nine carries.

After being taken off the field in a stretcher due to a helmet-to-helmet hit last Friday night after, Floyd returned to the field and showed no signs of the injury as he was 1-for-2 through the air for 18 yards and touchdown and also ran five times for 56 yards and a score.

“We really wanted to get this win,” Starling said after the game.

“We spent a lot of time this week at practice working on getting better and I think we showed that (Friday night).

“It felt good to bounce back like this,” the junior added.

Defensively, the Patriots were just as dominate, as McLaughlin, Sam Carroll, Tanner Free, Dylan Richards, John Rotton and James Kirkland all had sacks. The defense recovered two fumbles and held the Falcons to zero first downs in the second half.

The Patriots will be on the road again next week, this time taking on Hooper Academy.

Trojans no match for Rams