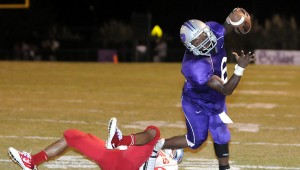 By Friday’s end, there will be on less undefeated school in the state of Alabama.

Pike County is hoping it is not them.

First place is up for grabs tonight as the defending 3A Region 2 champion Bulldogs travel to Abbeville where it will look to slow down the upstart Yellow Jackets in a matchup that pits two undefeated teams against one another.

PCH will take the field riding a 12-game region-winning streak, which dates back to last season, while AHS comes in on a surprising streak of its own.

“This is the biggest game of the year so far for us,” head coach Robert Johnson said Thursday night. “And our guys are excited about this opportunity.

“We know that we are going to have to play with focus – our guys need to rise to the occasion.”

Even though the season is still relatively young, the Bulldog coach said he knows the outcome of this game can have a serious effect on how the rest of the season pans out for this team.

“One of our main goals this season is to make the playoffs,” Johnson said.

“If we get a win (today), while that doesn’t guarantee anything, it certainly bodes well for us in the long run.

“A loss would really put our backs up against the wall, and obviously, we don’t want to be in that kind of position,” he said.

While the Yellow Jackets were able to advance to the postseason in 2009, they did so with a 5-5 record.

A season later, AHS has almost matched that win total.

In what could be the biggest surprise of the 2010 season, the Yellow Jackets have started its season with a 3-0 record, despite playing against three 2009 playoff teams in Eufaula, Luverne and Geneva,

In those three wins, the Yellow Jackets’ opponents have been outscored 101-55.

One of the biggest reasons for this is thanks to the numbers the team returned from last year.

On both sides of the ball, the Yellow Jackets had nine starters returning.

Last season, the 5-foot-11, 182-pound Kinsey finished with 1,192 yards on the ground and is well on his way to breaking that marker this season, as he has already rushed for 593 yards in three games, breaking the 200-yard barrier twice against Luverne and Geneva.

Defensively, the Yellow Jackets have five returning starters in their front seven, led by Jerry Jackson and Logan Blackburn.

The last six times PCHS and AHS have met, the Bulldogs have dominated, winning every time.

In each meeting the Bulldogs have scored 25 points or more, while the Yellow Jackets have averaged a little over eight points per game.

But that was last season.

¬“We know we got to stop the run,” Johnson said. “They can run the ball very well, but they can also beat you with their passing game, so we really have to be ready for everything.

“It’s going to take our best effort of the season to win this game,” he added.

Another key to a PCHS win lies with one of its leaders.

Last week, there was never any doubt about what the final outcome would be, as senior quarterback Jerelle Bailey led the Bulldogs.

Against Dale County, Bailey finished with 421 yards of total offense, 259 of which came on the ground.

The Bulldog also finished with four touchdowns, three on the ground and one through the air.

“Jerelle has been our go-to guy offensively the past couple of weeks, and he has done a great job for us,” Johnson said. “But we are prepared for what might happen if (AHS) finds a way to stop him.

“We have a lot of guys on offense who can help us more the ball, but obviously, Jerelle is going to do everything he can to help this team win.”

This will be the second time this season PCHS has ventured away from the friendly confines of Bulldog Stadium, with the first taking place during week two at Slocomb.

Even though his team is will encountering a potential hostile atmosphere, Johnson said his team will be ready.

“This is going to be a tough game no matter what,” the coach said.

“We could play this game in New York City and it would still be tough.

“I don’t think being on the road matters all that much. As long as we stay focused and execute during the entire game, I think we will be fine.”

The Bulldogs will look to stay perfect against Abbeville tonight, with a kickoff scheduled for 7 p.m