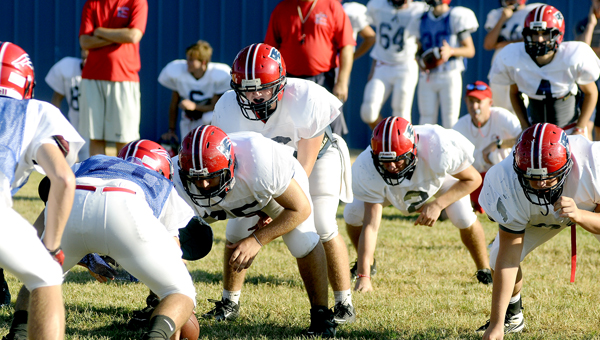 But the streak that dated all the way back to Nov. 2, 2007, lasting 11 games and almost three seasons, came to an end Friday night to the hands of Monroe Academy, in Monroeville.

The Patriots were unable to get anything going against the AISA AAA Region 1 newcomer, as the Volunteers cruised to a 35-0 shutout over the defending champions.

“We made a lot of mistakes,” head coach Steven Kilcrease said Monday afternoon. “Players, coaches, everyone made mistakes.

“When you turn the ball over five times, you don’t have a good chance at winning the game. I said it a lot going in, they were going to be the best team we would see in a long time.

“The players were down,” Kilcrease said about the mentality after the game. “They were as down as I had ever seen them before – this was a tough loss for everyone.”

Friday’s loss was the fewest points a PLAS team had scored since the 2007 season, when the team was also shutout against Macon-East, 21-0.

“The wheels kind of came off in the second quarter,” the coach said.

“When you win a lot, like we have been blessed with over the past couple of seasons, you begin to take things for granted. I think we all did that.

“(Monroe) came into the season with a chip on their shoulder, they came in hungry to prove they could win at this level.

“And they showed it Friday night,” Kilcrease added.

That was not the only loss the team experienced Friday night however.

With around nine minutes remaining in the fourth quarter, starting quarterback Blake Floyd was injured and taken to the hospital with concussion-like symptoms, after being hit on the chin by a defender’s helmet while scrambling on a fourth down.

“It was just one of those weird football plays,” Kilcrease said after recalling the hit.

“But Blake has been doing good and has shown no signs of a concussion.”

Floyd returned home later Friday night and as for this week, the junior would be limited in practice, taking a “day-to-day” approach, according to the coach.

Now, the team will look to bounce back, starting with its upcoming game against Ashford Academy, which also happens to the Patriots’ Homecoming game, on Friday night.

“It’s time for us to regroup,” the coach said.

“And I think our guys will do that, just like I think they are really looking to putting this game past them and playing well Friday night.”

Ashford will be looking for its first victory when it faces off with the Patriots, thanks to back-to-back losses to Lakeside and Chambers Academy to start the season.

This is the first time PLAS and the AISA A Region 1 team have met on the gridiron.

“We plan on getting back to work and focusing on us this week,” the coach said. “Little things hurt us (on Friday). Had we done things different, who knows what would have happened.

“But we know we have some improving to do, and that’s what we are going to send our time doing at practice,” Kilcrease added.

While the Falcons maybe hungry for a win, the Patriots will be entering the game hungry to get its season back on track.

“I think more than anything, we want to get back on the field and get a win. Everyone is focused on doing that. We are going to play hard and we are going to win.”

With Floyd possibly missing the game with the head injury, both Josh Starling and Nick McLaughlin will be getting more looks behind center, something Kilcrease said he is comfortable with.

“We got to be careful with Blake, but both (Starling and McLaughlin) saw a lot time at the position quarterback during the summer and for the past couple of weeks,” he said. “And I think both would do a good job for us whenever we call on them.”

The Patriots will look for a big win Friday night at home against Ashford Academy, with a kickoff scheduled for 7 p.m.