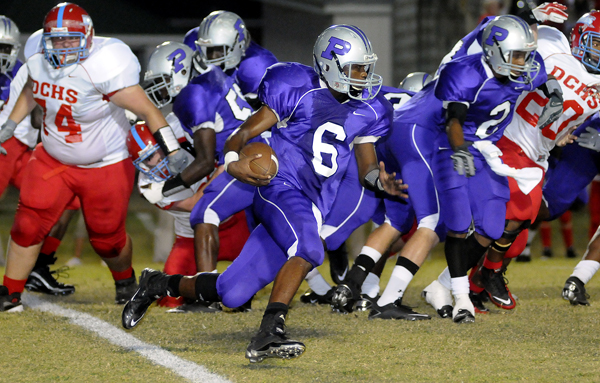 On a night where there is much to celebrate already, the Pike County Bulldogs gave their fans, both young and old, some more good news.

It was Homecoming night at Bulldog Stadium as the Dale County Warriors came into town, and thanks to a king-like performance from Jerrelle Bailey, the Bulldogs were able to improve to 3-0 on the season with a 27-14 win over the region foe.

“I was very pleased with how we were able to get this win,” head coach Robert Johnson said following the win.

“We gutted it out towards the end, but we were able find a way to hold on and get the win.”

This was the seventh-straight win for PCHS over DCHS.

Playing in his final Homecoming game as a Bulldog, Bailey did nothing but dominate the Warrior defense in all four quarters.

By the time the final horn sounded, of the 444 total yards of Bulldog offense, Bailey had contributed 421 of those yards.

The first three PCHS possessions of the game, Bailey led the offense in drives of 59, 80 and 96 yards, all ending the same way – a quarterback draw into the end zone, with runs of one-yard, five yards and two yards.

“I got to give it up to my (offensive) line tonight,” the senior signal caller said after the game.

“They made everything possible for me. They all played great tonight.”

In the first quarter alone, Bailey rushed the ball 11 times for 153 yards and two scores.

Of the 27 plays the Bulldog offense ran in the first half, only five did not involve Bailey running or throwing the ball.

Like Bailey, the Bulldog defense was doing its best to secure a victory as well.

Twice in the first quarter, the DCHS offense moved inside the PCHS five-yard line.

However, both times turned up fruitless and the Bulldog defense would force fumbles in the end zone and on the four-yard line to hold the Warrior offense scoreless.

“That was the ball game right there,” Johnson said. “We don’t make those two stops, it’s a completely different ball game.

“Turnovers play a big part in any ball game – that’s football. Whoever wins the turnover battle is more than likely going to win the game and fortunately for us, we were able to get those turnovers,” the coach said.

At the half, the quarterback had 176 yards on 16 carries with three rushing touchdowns, to give his team a 20-0 lead.

The Warrior offense would find some cracks in the Bulldog defense in the second half, however.

After the first PCHS punt of the night, DCHS drove down the field to put six on the board, with six minutes remaining in the third quarter, to cut the lead to 20-6.

Bailey would keep PCHS just out of reach, as he led the offense down another lengthy drive, this time finding the end zone with his arm, as opposed to his legs.

The quarterback would hit wide receiver Marlon Meadows on a 23-yard touchdown pass to extend the Bulldog lead to 27-6.

On the next play, the Warriors would again answer back, scoring another touchdown halfway through the fourth quarter, and getting the two-point conversion to make it 27-14, but by that point, it was too little, too late.

“I thought we showed some great effort tonight,” Johnson said.

“We didn’t play the whole game the way I would have liked to see it, but I thought we played tough all the way through. We have a lot of improving to do but this was a good win for us.”

As for Bailey, the senior finished with 259 yards on 27 carries with three rushing touchdowns and completed 10 of his 15 passes for 162 yards and a score.

“All I want to do right now is go to sleep, but it’s Homecoming night and I gotta celebrate,” Bailey said with a smile.

“We had a lot of people doubting us at the beginning of the season, but we are stating to turn them around. We are getting our fans back.”

PCHS will put its perfect region record on the line against newcomer to Region 2, Abbeville next Friday, on the road.