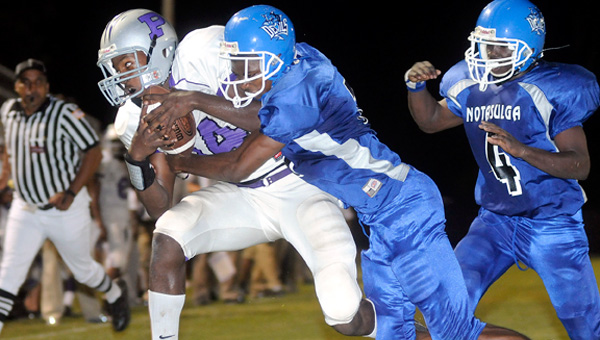 Quadry Gresham looks to get more yardage against Notasulga during a week one victory. Greasham and the rest of the Bulldogs will look to stay perfect on the season when Dale County comes to town for the PCHS homecoming game Friday.

Last week, PCHS traveled to Slocomb and came away with a 29-24 win after jumping out to an early lead on the Red Tops.

Now, the Bulldogs set their sights on another familiar foe in Dale County, as PCHS returns home to celebrate Homecoming.

Even though PCHS enters the ball game with a perfect record, head coach Robert Johnson still believes his team has a lot of improving to do.

“We still have not played a complete game,” the coach said.

“We have to do a better job of staying focused and making sure we finish the job.

“I think we have done a good job of setting the tone early on in the game, but we need to be able to do that in the beginning of the second half as well,” Johnson added.

As for the Warriors, DCHS will enter the third game of the season still searching for its first win, after losing to both Headland and Geneva.

A win over the Bulldogs would not only mark the first win of the season, but also the first victory in the series in six seasons.

PCHS is currently riding a six-game winning streak over DCHS dating all the way back to 2004.

During the winning streak, the Warriors have been shut out twice, in 2009 and 2005, and have been held to seven points or fewer three times.

Every win has been by double-digits or more, with the exception of one time, back in 2008, when the Bulldogs won 14-6.

“They are a very good running football team,” Johnson said about DCHS.

“They are a team that is going to come after us.

“We have got to be ready for that style of attack,” the coach added.

“I am proud of the fact that we have been able to be successful so far this season, but we have to continue to stay focused on what we want to do,” the coach said.

“We have to improve everywhere, and that’s what we are trying to do.”

The Bulldogs will look to clinch another Homecoming victory tonight against the Warriors, with a kickoff scheduled for 7 p.m.