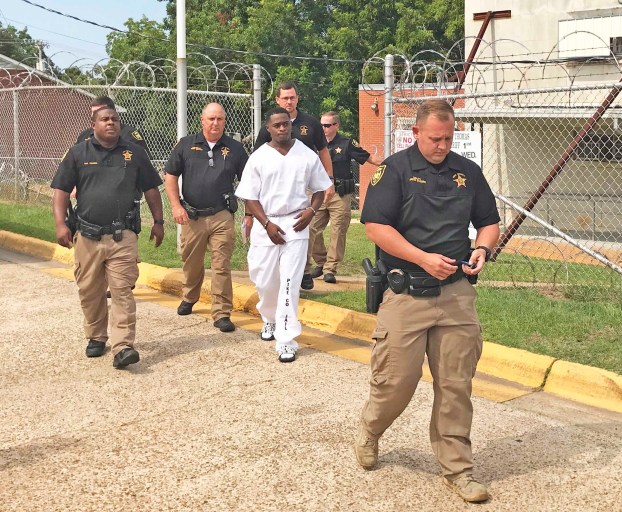 Authorities announced on Monday that they have arrested a suspect in the robbery and homicide at a Brundidge convenience store on Wednesday, July 24.

Leon Terrell Flowers, 23, of Troy, has been charged with capital murder and robbery five days after the incident shook Brundidge and the surrounding community.

“We want to bring closure to this heinous and senseless crime,” said Sheriff Russell Thomas.

Brundidge Police responded to the J&S Buy Rite at 120 E Troy St. in Brundidge Wednesday at 7 a.m. to the report of a man found dead inside the store. Authorities arrived to find 30-year-old store clerk Neil Purush Kumar, a Troy University graduate student, dead of a gunshot wound.

Surveillance footage at the store showed a suspect clothed entirely in black enter the store at approximately 6 a.m., just after the store opened, pivoting and drawing a handgun on the clerk. Investigators said Kumar cooperated with the suspect’s commands, but the suspect fired on the clerk after retrieving an undisclosed amount of money from the cash register. The suspect then fled on foot from the scene.

Thomas said Flowers was developed as a suspect in the investigation within hours of the murder. Flowers has had four prior felony convictions, including a charge of manslaughter in the 2015 shooting death of Mantrell Jordan at Autumn Ridge Apartments.

Flowers was convicted of the crime in March and sentenced to a split sentence of 18 years, with three years to be spent in prison and 15 years on probation.

Because he had already been in the Pike County Jail for three years awaiting trial, Flowers was released on time served on April 30.

Anderson said the prosecutors had asked or a 30-year sentence in the manslaughter, although Flowers did not fire the fatal shot in that crime.

“We are concerned about people not getting maximum sentencing,” Anderson said. We’re getting the attention of the parole board and this is not going to be done any more. He was out for a matter of months and then this happened.”

Thomas said a five-year “enhancement” is needed in Alabama to “get tough” on gun violence.

“How do we stop the senseless killing and the gun violence?” Thomas asked. “I’ve spoken with some legislators and brought it up in a district attorney’s meeting, we need to add an enhancement of five years for any crime involving a gun, whether that’s stealing a gun from a vehicle, attempted murder or assault. That should also apply if someone has two or three serious felonies. If we had that in place, we wouldn’t be here today.”

Brundidge Police Chief Moses Davenport said the crime shook the small town, but that he is thankful for the quick arrest in the case.

“This was out of character for the town,” Davenport said. “I think the citizens will rest more at ease today now that this arrest has been made. Brundidge is going to be OK.”

Thomas said the community’s engagement was a tremendous asset to investigators.

“We express tremendous gratitude to the community for all the calls we have received with input,” Thomas said. “The community has been very active and engaged.”

Thomas said the surveillance footage was very valuable to investigators. The footage was released Friday morning, and a $4,000 reward was offered for information leading to the suspect’s arrest.

The community rallied for an answer to stop the violence Sunday night, also holding a candlelight vigil for Kumar.

“I thank everyone for working together,” said Brundidge Mayor Isabell Boyd. “Without unity, there is destruction. Brundidge has unity. We don’t have to be afraid any more.”

Boyd urged residents to remain cautious though, and encouraged people to put up surveillance systems at their own residences to help catch criminals in the act.

Anderson said the cooperation of multiple departments made the arrest possible.

“I’ve been doing this for 15 years and have never seen this many agencies come together and bust their tails to get a dangerous criminal off the streets,” Anderson said. “They toiled day and night.”

Robin Sullivan, chairman of the Pike County Commission, thanked the community for working together.

“This is a testament to our close-knit community,” Sullivan said, motioning to the array of officers from different agencies standing around the courtroom. “They’re the reason this came to a close as fast as it did.

Because the murder occurred during the commission of a robbery, Flowers is charged with capital murder, which is subject to a sentence of either life in prison without the possibility of parole or the death penalty.

Gary Bradshaw of Enterprise has been appointed to represent Flowers in the capital murder case. No preliminary hearing has yet been called by the defendant.

Leon Terrell Flowers, age 23, of Troy, Alabama has been charged with capital murder in the July 24 shooting and... read more