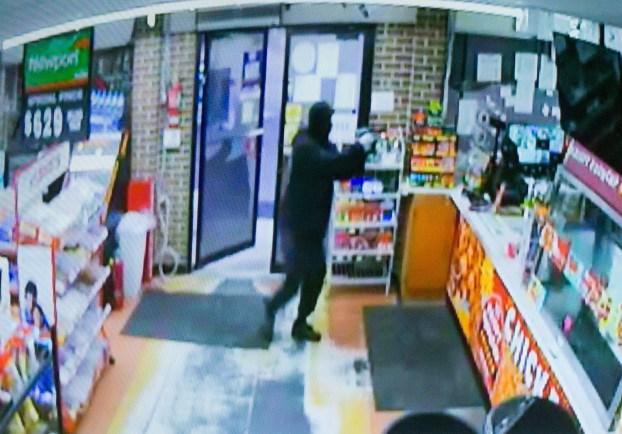 Authorities from multiple Pike County agencies held a press conference Thursday morning at the Pike County Courthouse to release surveillance video of a suspect who murdered a clerk during a robbery at the J&S Buy Rite in Brundidge early Wednesday morning.

The footage shows the suspect, who authorities said they believe to be a black male, loitering around the store shortly before it opened at 6 a.m. Wednesday. The suspect walks out from behind a privacy fence near the store and walks toward the store before disappearing from the footage beside the store. A few seconds later he walks back to the fence.

The next video shared by authorities shows the suspect entering the store, quickly turning and pointing a handgun at the clerk, 30-year-old Neil Purush Kumar, A Troy University graduate student.

The suspect was covered from head to toe in black, including what appears to be a ski mask. He is also wearing white gloves.

The next segment of footage released by authorities shows the suspect coming from behind the counter and exiting the store.

Authorities said the suspect entered the store within four minutes of it opening. He then ordered Kumar at gunpoint to open the register, took an undisclosed amount of cash, and shot Kumar. The suspect left the store and exited to the right on foot, disappearing from the video over the nearby railroad tracks.

A $4,000 cash reward is now being offered for information leading to the arrest of the person responsible for the crime.

Sheriff Russell Thomas said there has not been a crime like this in Brundidge in many years.

“I don’t think we’ve ever had a robbery-homicide,” said Brundidge Police Chief Moses Davenport. “We’ve had homicides, but not with a robbery.”

Thomas said the sheriff’s department and police department have increased patrols in the area.

A candlelight vigil has been planned for Sunday, July 29 to pray for the family and friends of Kelsey Starling... read more