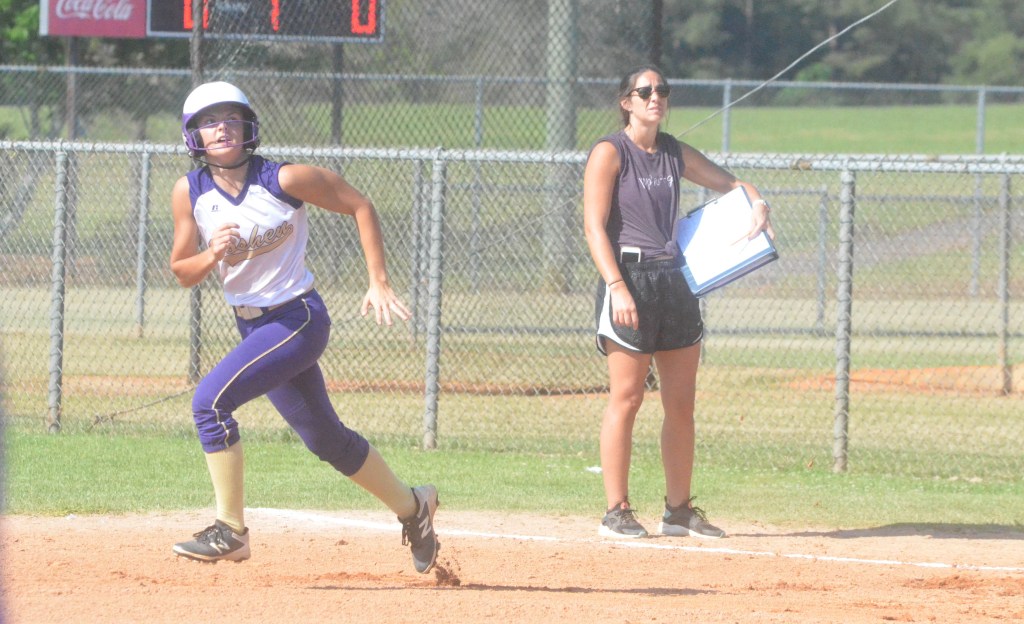 Photo/Mike Hensley Avery Henderson watches a ball as she takes off from first base. The Eagles fell to Billingsley 13-12 on Friday morning.

The Goshen Lady Eagles had their 2018 season come to an end in excruciating fashion on Friday morning at the Sportsplex.

Down by one in the top of the seventh inning, Hannah Calhoun led off and tried to score the tying run after she hit a shot to right field. The fielder misplayed the ball and let it go to the wall. Calhoun was waved around third, but was thrown out.

“It was on me,” said head coach Amy Warrick. “I saw the opportunity and tried to force one through. They (Goshen) played hard and gave a great effort. It was a great first game. Billingsley is a good team and I wish them luck.”

Brooke Bennett pitched the first 2.2 innings for the Eagles. She allowed nine total runs before giving way to Hannah Calhoun. Calhoun pitched the remainder of the game and allowed three runs along the way.

“I thought Hannah did great,” Warrick said. “Hannah came in relief. We had to be picky with our pitching today because we had to save our arms. I just felt like I had to bring her in. She did great. I can’t say that enough.”

The Eagles couldn’t have asked for a better start after they posted three runs in the first three inning. Bennett carried over the power from Thursday when she belted a two-run homerun into a tree in left. Kate Warrick also had an RBI double in the inning.

Billingsley answered in their half of the inning when they scored four runs to take the one-run lead.

The teams traded runs over the next few innings. The Eagles got an RBI double by Calhoun in the second and Shea Sheppard scored on a wild pitch to bring the Eagles to within one at 5-4.

Billingsley scored a run in the fourth and two runs in the sixth to retake the lead once again.

After Calhoun’s throw-out at the plate, the Eagles went down in order to end the game.