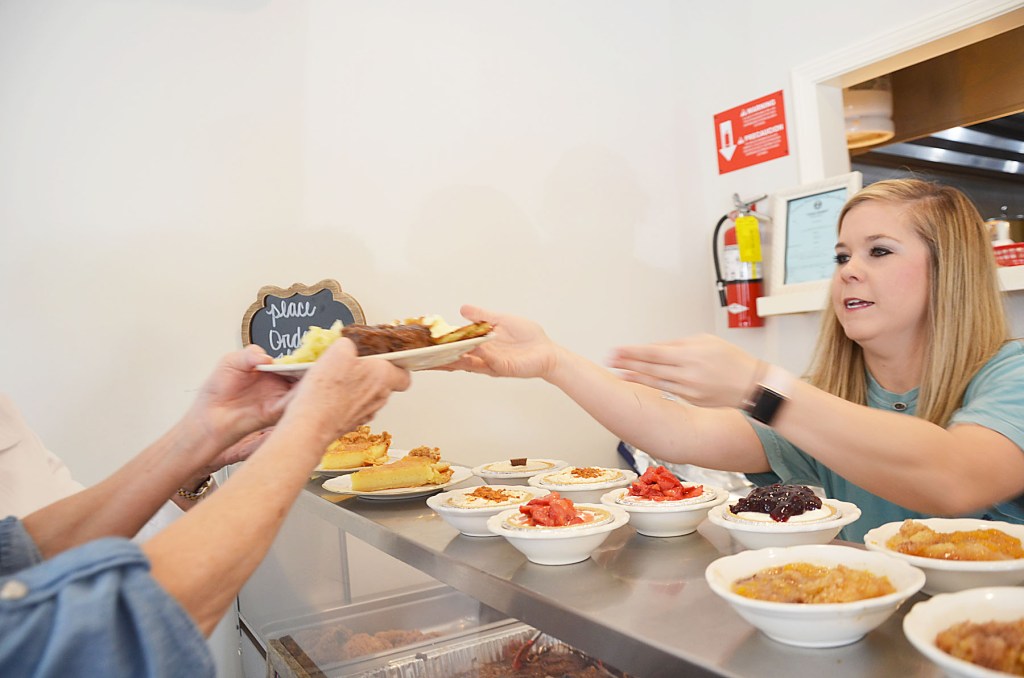 What in the world was Carola Jeter thinking?

Carola has been asked that question too many times to count.

So, she answers the only way people might understand.

“I fell and landed on my head,” Carola said laughing.

Perhaps, that’s the only way to explain why a grandmother and great-grandmother would open a restaurant in the small town of Goshen in rural Pike County.

Some mornings when Carola is in the kitchen at Me Me’s over-lighting eggs and buttering toast, she asks herself the same question. Then, she hears the laughter at the “old geezers” table and glances over at the familiar faces and remembers why.

“I’ve always loved to cook and I love to cook for a crowd,” Carola said. “There’s just something special about sitting around the kitchen table with family and friends.”

That kitchen table atmosphere is what Carola wanted to create for those who would come to her restaurant round the bend in the road.

“When Rogers Grocery closed, I started thinking about putting in a restaurant,” Carola said. “That’s something I always thought I would like to do. I knew it would be long hours and hard work. But that didn’t discourage me and my family gave me their support.”

Carola’s idea was to keep the “old country store” tradition of Rogers Grocery and the tradition of going to grandma’s with a Southern-style diner.”

She found the idea exciting and her family joined in the fun of planning Me Me’s and making it a reality.

“My grandchildren call me Me Me and that’s the name I wanted to call the restaurant,” Carola said.

Me Me denotes familiarity and Me Me’s is a family-friendly kind of place, kind of like being at grandma’s.

“We want people to feel like they are at home when they come here,” Carola said.

And, Me Me’s is just what she dreamed it could be – A Southern Diner and a gathering place for the community and any others who stop along the way.

It would be difficult not to feel at home when Carola Jeter is in the kitchen.

“I am the chief cook,” she said, laughing.

Carola’s reputation as a fine cook followed her right into the restaurant business. Folks in and around Goshen know, when Carola’s in the kitchen, “it’s gotta be good.”

The foods she serves are from “tried and true” recipes, mostly family recipes. And, to a one, they are the kinds of foods that keep people coming back for more.

“I batter the fatback, where most people don’t,” Carola said. “That’s just the way I grew up and that’s the way I like to cook fatback.”

Carola’s cheese grits are just as popular as her over-light eggs. Breakfast is from 6 until 9 a.m. Then, the kitchen crew that includes Carola’s daughter, Trina Hale, and grandkids, Kristin Ward and Todd Smith, turn their attention to the lunch menu that includes meat ’n threes or more or less. Lunch choices usually include chicken on the bone and tenders, livers and gizzards and fish on Friday. The veggie choices often include dumplin’s and cornbread dressing. Sandwiches are always on the menu – hotdogs, hamburgers, pimento cheese, chicken salad — just say, if it can fit between two pieces of bread, Me Me makes a sandwich of it.

But, those with a sweet tooth will not want to leave the diner without one or two of Me Me’s homemade desserts – all made by the chief cook herself. Me Me’s cheesecakes get two thumbs up. The cakes include her “childhood” homemade pound cake and a lime cake that would win a blue ribbon at any county fair.

Me Me’s homemade pies are all blue ribbon caliber but her egg custard just might top them all. Sometimes, it’s given the name two-story egg custard because the custard sits on a layer of stewed dried apples.

Most of Carola’s recipes are tried and true but sometimes she has to improvise. Her okra cornbread is a good example.

“Once I was cooking for a big crowd and realized I didn’t have time to fry the okra and the cornbread,” she said. “So, I just chipped up the okra and put it in the cornbread and fried it. I call recipes like that panic recipes.”

Me Me’s – A Southern Diner opened in February and serves breakfast and lunch, Monday through Saturday.

Folks have already been asking when Me Me’s is going to start opening on Sundays.

Carola is staying mum but Trina has a quick answer.

“Mama does not have enough children for that,” she said, with only a hint of a smile.