DREAM JOB: Melanie Ross and family open their own salon, boutique in Troy 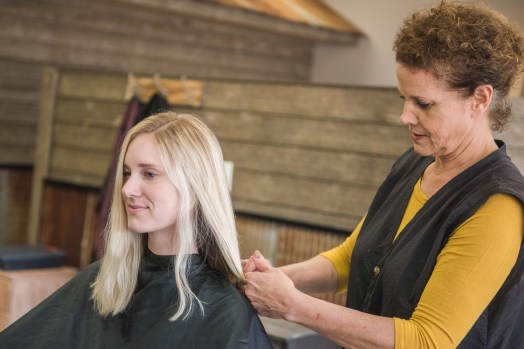 Darby Campbell gets a fresh cut from Melanie Barnes Ross, one of the first cuts given at Mel’s Master Salon on the day of it’s soft opening Thursday, Feb. 15. Campbell said she felt great after getting the cut. Ross and her daughter, Kaylee Ross Ulmer, are planning to have a grand opening for the salon in March. 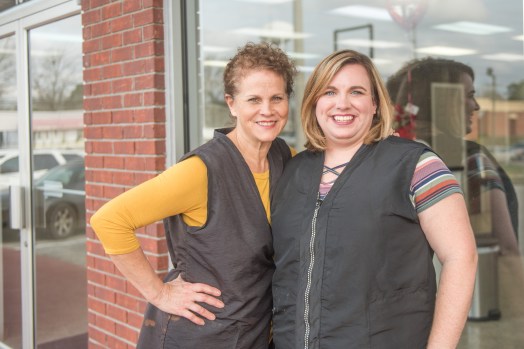 Melanie Barnes Ross describes herself as a “workaholic,” but she is also a family woman. So when the opportunity to fulfill her career dream while spending more time with her family, she jumped on it.

Instead of going home though to see her family, she’s brought the family to work.

“My husband, Jeff Ross, built almost everything in here,” Ross said, motioning to wooden rooms and barriers around her new salon, Mel’s Master Salon. “This has always been my dream to do this. Then my oldest daughter, Kaylee (Ulmer), started talking about wanting to open a boutique … it felt like God hit me upside the head and said it was time to take this leap. I just had this peace. God said ‘You put your hand to do the work and I’ll do the rest’ and everything else has just fallen into place.”

There’s even more family coming in too to help Ross out. Ross said when she married her husband a few years ago, she added four more kids with three of her own already.

“As a single mother for 12 years, I just worked,” Ross said. “Family has always been first, but work became a necessity. By incorporating them into the mix, I can be a workaholic and still spend time with family.”

Also in the salon is the 31:Ten boutique, a collection of men’s and women’s clothing curated by Ulmer.

“I just have always loved clothes and fashion,” Ulmer said. “I worked at a boutique in Troy that is no longer open while in college there, and I  realized that I loved it … I wanted there to be a place people could come to find something good about themselves; I wanted to have a collection that is modest where women can also feel good about themselves without paying a fortune. When my mom was talking about opening her own salon, I was thinking this is sort of my chance.”

Ulmer said she also wanted to offer options for men, bringing in yet another family connection by stocking clothing from “Water’s Bluff,” a clothing company owned by her brother-in-law.

“There’s not really a place for that,” Ulmer said. “I have three brothers that all live in Troy and when it comes time for them to find a nice button-down shirt or even for women to get a valentine or birthday gift, there’s no place locally to do that.”

Ulmer said she wants to be a blessing to women more than anything else.

The salon and boutique only opened last week, so Ross and Ulmer said there is still some work to be done, but the salon is open and the boutique is stocked.

The salon team also includes one stylist, Mary Alice Helms, who said the Lord led her from owning her own salon in Victoria to come join Ross to open Mel’s, despite the fact the two had never met.