A TASTE OF HOME: Valencia brings touch of Mexico to Troy with ‘tienda’ and ‘tacquiera’ 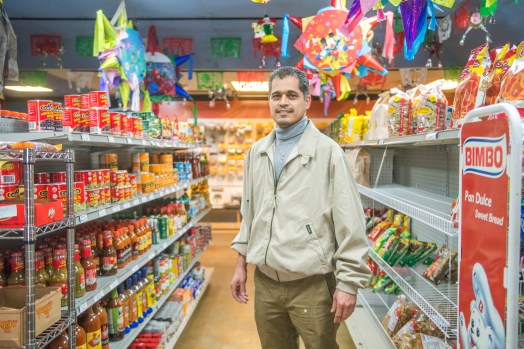 Messenger photo/Jonah Enfinger Javier Valencia opened the “Taqueria,” a Spanish word for restaurant, on George Wallace Drive after formerly running a “tienda,” the Spanish word for store, in the same location. The tienda is now located on U.S. Highway 231 in the former Taco del Mar building. 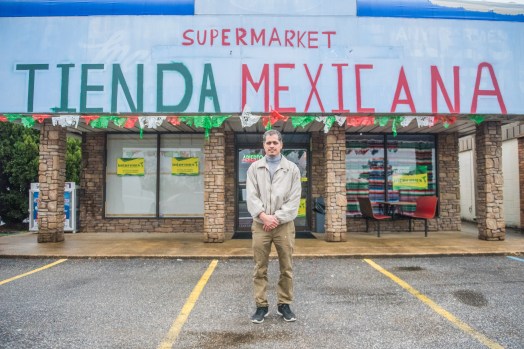 Messenger photo/Jonah Enfinger Javier Valencia stands in front of his freshly painted sign at the new location of his Tienda Mexicana, or Mexican store.

Every two weeks, Javier Valencia makes a drive from Troy to Atlanta to check out some of their local warehouses and then makes the long journey back; sometimes it can take 12 hours or more of his day. But he said the long drive and hours spent collecting his products is worth it to provide authentic Mexican goods to his customers.

Valencia is the owner and operator of La Valencia Tienda Mexicana, or in English, “The Valencia Mexican Store.” He has been operating the store for years on George Wallace Drive directly behind El Rodeo Mexican Restaurant.

But he said an opportunity recently came his way after he began selling homemade tacos out of the store.

“People started coming in and asking for other food,” Valencia said. “They would ask for burritos or queso and we didn’t have that. We saw that this is something the customers wanted.”

So he bought a building on U.S. Highway 231 near the intersection of Alabama Highway 87/South Brundidge Street and set up shop. He decided though to move his store to the new location and redesign his old Troy Plaza Loop spot as his restaurant.

The restaurant is brand new and is the definition of a “hole-in-the-wall,” a blink-and-you’ll-miss-it little place tucked into a shopping center. The inside is simple and efficient.

The food is what sets the new restaurant apart.

Valencia said his restaurant is different because it offers authentic Mexican flavor. The tacos come with two 100 percent corn tortillas and are simply garnished with the meat of choice, cilantro and white onion. Other toppings are available at the taco bar if a customer chooses to add other ingredients.

“In Mexico you push a cart down the street and get whatever you want,” Valencia said.

Valencia said he did grow up in Mexico, but it has been about 20 years since he lived in the country.

He ended up in Troy from Atlanta though, finding work at El Rodeo. The owner of the restaurant at the time also owned the Mexican store, then called El Torito, Valencia said. So Valencia was shifted from the restaurant to the store. But soon after, the owner decided to sell the store, and Valencia decided to buy it.

Valencia said he loves his job despite spending long hours there each day.

“It’s not making me rich but it pays the bills, and that is what most people are looking for,” Valencia said.

And while he gets the money he needs to live, he said he’s also providing an invaluable service to those seeking for real Mexican ingredients they need to make meals from their homeland.

“There are Mexican dishes you can’t make without many of the products here,” Valencia said. “There is nothing really around here that has Mexican products. Almost everything here is made in Mexico.”

Valencia also said he is even trying to find authentic food for people of other countries such as Vietnam after requests, but said he is primarily focused on Mexican products.

As of the last census, Troy only has a 2 percent population of Hispanic or Latino people, but Valencia said his store draws people from all around from Luverne to Ariton to Clio that are in search of authentic Mexican goods.

The restaurant is located at 812 George Wallace Drive and is open from 8 a.m. to 8 p.m. The store is open during the same hours and is located on U.S. Highway 231 near the intersection of Alabama Highway 87.