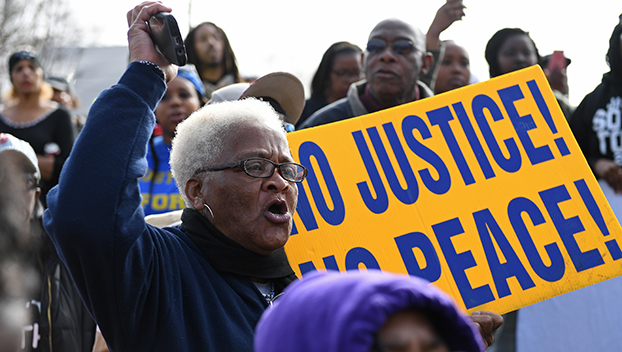 During a protest and rally in front of the Troy Police Department in Troy, Ala., Saturday, Dec. 30, 2017. (Photo/Thomas Graning)

Organizers said Wednesday they will block U.S. 231 on Feb. 5 to protest the Troy Police Department’s use of force in a teen’s arrest last month.

“I spoke with several residents of Troy at a town hall meeting (Tuesday) and asked them if they wanted to block the highway, and they said they did,” said Kenneth Glasgow, one of the organizers of a recent rally calling for answers from city officials. “I was going to look at doing it on a Saturday but they wanted to do it on a Monday. So it will be Monday, February 5.”

Glasgow, who also said he is a spokesman for the family of Ulysses Wilkerson III, issued an ultimatum to Troy officials at the Dec. 30, 2017, rally to release evidence and discipline the officers involved in the incident by Jan. 5 or he would call on “national leaders” to come and block the highway for another rally.

The incident began shortly before midnight on Dec. 23, 2017, when police said they saw Wilkerson emerge from behind a closed business. As officers attempted to stop the teen, he allegedly fled on foot. Troy Police Chief Randall Barr said officers used “reasonable and necessary” force to subdue the teen after he resisted arrest and reached for his waistband. Barr said a gun was later found along the route of the pursuit.

Angela Williams, the 17-year-old’s mother, posted photos of his bloody and swollen face on social media following the arrest. The photos circulated quickly and the family held a press conference the following Friday to call on city officials for answers.

Police, local officials and representatives of the State Bureau of Investigation all have refused to release details of the incident, citing an ongoing investigation. One officer has been placed on administrative leave, but officials have not released his identity.

Outrage over the incident also has drawn threats of an economic boycott. Karen Jones of the Montgomery chapter of Black Lives Matter addressed the Troy City Council on Tuesday, calling for “justice or else.”

Glasgow said Jones is not working with the family and that any calls for boycotts and other actions are not what the family seeks.

“I can say emphatically right now that the family has told me, as their advocate, that they want peace and want this very well organized,” Glasgow said. “The family just wants answers.”

The family’s attorneys declined to comment for this story.

However, Dianna Bascomb, president of the Pike County branch of the NAACP, called for residents to remain calm and seek answers in a peaceful manner.

“We want calm,” Bascomb said. “We do want answers, transparency and accountability. I’m working with the mayor and hopefully we will get this resolved without anyone going to any extreme measures. We cannot afford to allow our emotions to control our actions … We hope by going through other measures we will be able to get answers and work with elected officials and law enforcement, but we must remain calm so we don’t have situations like we have seen in any other cities and states.”

The SBI released a statement Saturday that it is standard practice not to release information during an investigation.

“It is understandable for members of the family and other concerned citizens to have questions,” said SBI officer Gregory Carpenter in the statement. “It is SBI’s responsibility to collect, report and communicate all related facts in a properly legal manner so that the criminal justice system is best equipped to render a finding. SBI does not condone any premature releases of information that could jeopardize the rights of all involved parties and/or undermine the course of justice.”

Mayor Jason Reeves said a commitment to a “full and fair investigative process” prohibits him from discussing details.

“All involved and our community must await the gathering of facts and the completion of this investigation,” Reeves said. “I continue to ask for patience as we allow SBI to complete their work. It is my intent to do everything I can to ensure a timely and proper resolution of this matter.”