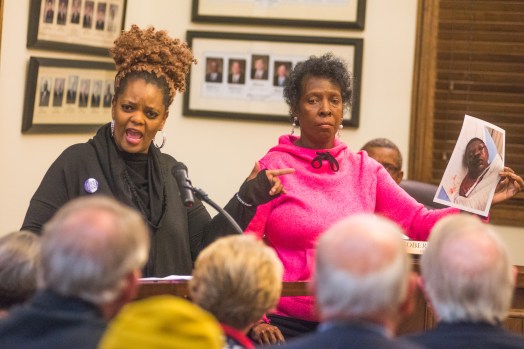 Karen Jones of Black Lives Matter Montgomery speaks to the Troy City Council as local resident Carolyn Barrow holds up a photo of Ulysses Wilkerson, a 17-year-old that was forcefully arrested by the Troy Police Department minutes before Christmas Eve. 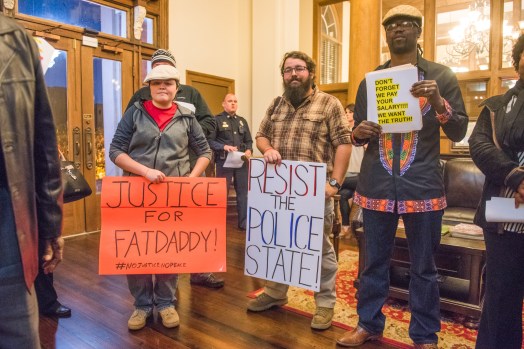 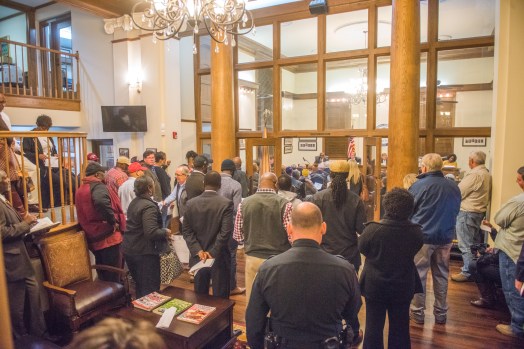 Karen Jones, director of Montgomery Black Lives Matter, told the Troy City Council Tuesday that protestors are not backing down from their requests for answers regarding the Troy Police Department’s use of force on a teen during an arrest last month.

“As city council members your job duty and description is for you all to inquire about certain issues that happen in the city, departments agencies and make investigations of municipal affairs,” Jones said, as local resident Carolyn Barrow held up a photo of the teen, 17-year-old Ulysses Wilkerson, with a bloody and swollen face following the arrest. “This child has been severely, brutally beaten. If anybody in this room cannot feel this pain, something is wrong with you.”

In addition to Jones, at least 5 to 10 other protestors were present at the council meeting, including several with signs.

Jones said the discretion on whether to release body camera footage of the incident lies with the city, specifically Mayor Jason Reeves, and that the video should be released to the family and public.

Reeves responded with an updated statement defending his decision not to release or discuss the evidence of the case.

“On December 24, following the arrest of a juvenile around midnight, I asked for an independent investigation because I felt it was necessary for all involved as well as our community,” Reeves said. “The incident remains under investigation with the State Bureau of Investigation (SBI) and the City of Troy continues to fully cooperate as they continue their investigation.”

An SBI statement released Saturday stated that they do not condone the release of evidence or information during the course of the investigation.

“It is understandable for members of the family and other concerned citizens to have questions,” said SBI officer Gregory Carpenter in the statement. “It is SBI’s responsibility to collect, report and communicate all related facts in a properly legal manner so that the criminal justice system is best equipped to render a finding. SBI does not condone any premature releases of information that could jeopardize the rights of all involved parties and/or undermine the course of justice.”

Reeves said a commitment to a “full and fair investigative process” prohibits him from discussing details.

“All involved and our community must await the gathering of facts and the completion of this investigation,” Reeves said. “I continue to ask for patience as we allow SBI to complete their work. It is my intent to do everything I can to ensure a timely and proper resolution of this matter.”

Jones said until answers are released, protestors will be disrupting the local economy and holding more rallies.

Jones said businesses that don’t display a sign declaring “Justice for Fatdaddy” will be the ones that protestors look to “shut down.”

“Backup is on the way,” Jones said. “A call has been sent out nationwide and, Troy, now you’re going to be famous…. Release any footage, mayor… Let the truth stand and justice follow or else – and the else could mean whatever you choose it to mean.”