Teen’s mother: ‘We will not settle until we know the truth’ 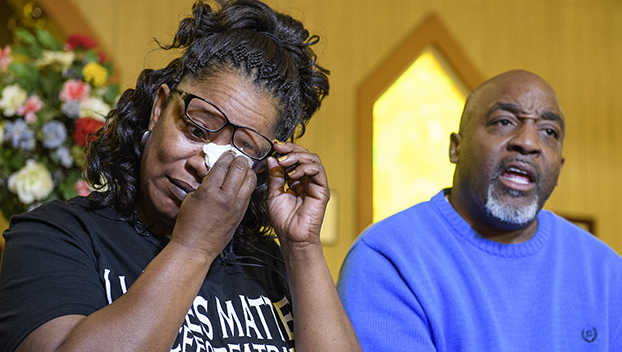 The mother of Ulysses Wilkerson III says she will not rest until the truth is made public and police officers are held accountable for the beating of her son during his arrest last weekend.

Local and national media crowded the St. Paul AME Church in Brundidge Friday morning to hear from the family of 17-year-old Wilkerson, who was injured during an arrest by the Troy Police Department on Dec. 23

“As a mother I was shocked, horrified and devastated to see my son this way, a victim of police brutality,” said Angela Williams, Wilkerson’s mother. “While I’m hopeful that the State Bureau of Investigation will uncover the truth, I still call on the community to take a stand. We will not settle until we know the truth behind the brutal beating of my dear son and these police officers are held accountable for their crime.”

No Troy police officers have been charged with a crime at this time, but officials confirm one officer has been placed on administrative leave.

Troy police say they observed Wilkerson emerge from behind a closed business in Downtown Troy just before midnight Saturday and attempted to make contact with him when the teen fled, leading to a pursuit that ended in Wilkerson’s arrest on misdemeanor charges of obstructing governmental operations and resisting arrest. In an initial statement, Police Chief Randall Barr said Wilkerson’s refusal to comply with officers’ commands led to the use of physical force during the incident.

Kenneth Glasgow, the family’s advocate, said that the family just wants answers as to what happened that night.

“There’s a lot of rumors out there, a lot of things being said,” Glasgow said. “We’re not particularly interested in all the rumors and all; we just want the facts … (The family) just wants the truth. They want everyone to remain peaceful – and I repeat everybody remain peaceful – and organized and let’s get down to the truth. None of us know what happened out there.”

Glasgow called on the Troy Police Department to release any evidence it has, including audio and video footage of the arrest to the public.

Glasgow said the family is concerned about their message being twisted into a “racial battle,” which he said is not what the family wants, pointing out shirts the family wore bearing the phrase “All lives matter: #justiceforfatdaddy.” “Fatdaddy” is Wilkerson’s nickname.

“Let’s not anybody diminish or demean it into a racial battle,” Glasgow said. “It’s about right and wrong. It’s about human rights … Let me make sure that it’s clear; the family, the mother and father right here, stated to me on the onset when we first talked that it wouldn’t matter to them – at that particular time we didn’t even know whether the cop was white or black. The mother wanted justice, the father asked for justice; he didn’t care whether he was white, black, purple or polka dot.

“The South has a tendency to diminish and demean cases like this and making them racial. It’s not about black and white; it’s about right and wrong. It’s about human rights. All our lives matter and we all count.”

Williams said police have still not told her anything about what happened during the arrest.

The Rev. Ulysses Kincey, pastor at St. Paul AME, said the question of why this happened should be on everyone’s minds.

“I think the question of ‘Why?’ should be a very loud question that the country needs to take note of because this is no isolated incident,” Kincey said. “Taxpayers pay for public officers or public officials. We vote them in – we need a police department but not a Gestapo … There must be drastic change in what is happening here. Because this is supposed to be the land of the free and the home of the brave.”

Ulysses Wilkerson Jr., the teen’s father, said that his son’s left eye socket is fractured in three places. Williams said her son is worried he may lose the eye.

“He’s in pain and sleeping,” Williams said. “He’s worried about the eye… worried about he’s going to lose it … He goes Tuesday to see what kind of surgeries they’re going to do on it.”

The teen’s sister, Brittany Williams, says she hasn’t been able to sleep since the incident happened. The mother says nobody in the family has.

“The comments and stuff that people put (on social media) – y’all don’t understand,” the elder Williams said. “I didn’t want this to happen. I didn’t want none of this attention. But it needs to stop. It needs to stop today. That could have been a head injury that cost him his life. He’s only 17.”

The family says the teenager can’t remember anything about the incident except a “big, tall white officer kicking him in the face.” They say he cannot remember if he went to the police station before going to the hospital.

A statement from Troy Mayor Jason Reeves on Friday clarified that Wilkerson was evaluated at the scene and transferred to Troy Regional Medical. He was then transferred to a Birmingham hospital.

“You’ve got mothers and all that have been crying out to me and the sad reality is they’re saying to me ‘At least Ulysses (Wilkerson III) didn’t die,’” Glasgow said. “So have we become so desensitized to people’s lives that that is the only cry? That he’s fortunate that he didn’t die? Like police killings have become our normal in this country? That’s the sad reality.”

Angela Williams said she is glad that her son is still alive.

“I can only thank God because I could have been doing a funeral,” Williams said. “I don’t want this to be happening with nobody at all.”

“We can’t get out there in the streets and do all this violence and stuff like other cities does,” Harris said. “If you do that, you ain’t going to find out anything. We need to be calm and let the law take its place. And we want (officers) to know we are looking a them and if things aren’t right – they already have lawyers … We’re just going to have to sit back and wait and find the findings that come out.”

Glasgow said a rally is planned for Saturday at 11 a.m. at 300 Elm Street and that a national rally would be coming in the “near future.”

Glasgow emphasized that the rally is meant to be peaceful and addressed how the family is handling outsiders that are breaking with that message on social media.

“Fortunately, a lot of people are getting in touch with us going through the father and the mother and myself and we’re able to curtail a lot of rumors and stuff that are going on,” Glasgow said.