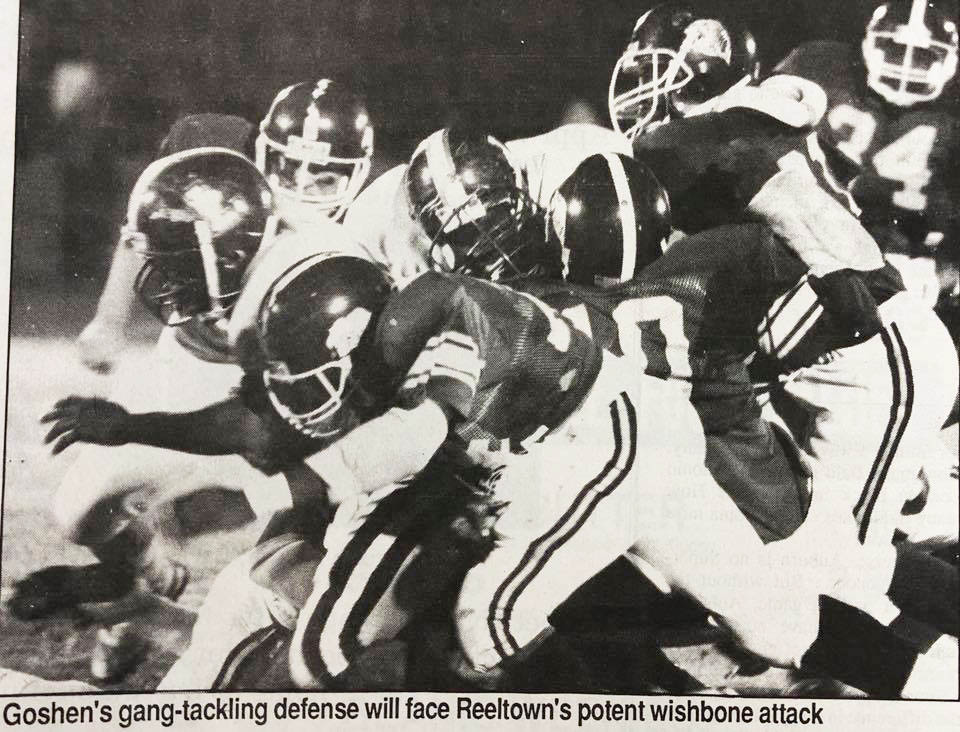 File Photo The Goshen Eagles took on Reeltown in the 1991 State quarterfinals. The 2017 Eagles became the first Goshen football team to make it at least that far since that memorable year and have now advanced to the semifinals for the first time.

As the success of the 2017 Goshen football program has unfolded, as the Eagles advanced game by game and round by round in the AHSAA Class 2A state playoffs, those close to the fan base and community could not help but draw parallels between this talented team, and the team that set the bar high in 1991.

Over 25 years ago, fourth-year head coach David Helms had a very talented and experienced team, and after an early season loss to even the Eagles record at 1-1, Goshen ran off 10 consecutive wins to pull to 11-1 on the year, before being eliminated by Reeltown in the third round of the playoffs. Before this season, that was the best record and as deep in the playoffs as Goshen had ever been.

The 2017 Goshen Eagles, 12-1, have won three playoff rounds thus far and play Leroy in Goshen this Friday night in a semi-final matchup, with the winner advancing to Tuscaloosa next week for the state championship.

“Without question I am very proud and tickled to death for them,” said Helms. “The stars just don’t align and something like this happen. It is years of hard work. You get a group like they’ve got now that is senior laden, and you’ve got an opportunity to do special things.”

Helms coached for 11 seasons at Goshen, and Bart Snyder is the head coach now, in his ninth year. Snyder was an assistant coach for Helms during that 1991 season, and Helms is proud of the direction he has taken the program and the success they have enjoyed.

“Bart just goes about things the right way,” said Helms. “They work hard, and they just do the little things really well and that has got them to where they are right now. Of course Bart played in the mid 80’s and has been there ever since. He’s dedicated his whole career and life to Goshen High School. They’ve just got a group that has bought in, they have that confidence, and I think they can win it all.”

Helms remembers what a great physical team the 1991 squad was.

“We had a great group of kids,” said Helms. “They were just hard working, all summer long, coming in the weight room, just a determined bunch, probably very similar to what Goshen has this year. They loved to play the game. They were a very physical team, and loved to hit folks. I remember practicing every week, and we had a motto that if they would hit on Friday nights we will tackle only on Tuesday of the next week. If we did not hit hard on Friday night we would get after it pretty hard that following week.”

That 1991 team shut out six opponents, while the 2017 squad has combined a powerful offense and defense to outscore opponents 476-157 through 13 games.

One of the many talented players in 1991 for Goshen was Curtis Shaver, then the quarterback, and now a Battalion Chief for the City of Troy Fire Department.

“One of the similarities I see in the two teams is the very aggressive defense and the running backs, just like we had in ’91,” said Shaver. “They had the “You’re not going to bring me down,” attitude. When we won one of our playoff games, we had to make a drive in the last few seconds to win the game, a lot like this years team. I threw an interception late in the game, but then we drove the field the last few seconds to win. Coach Snyder was my quarterback coach, and he coached me through the whole thing and helped me pull it out at the end. There were several awesome plays by Dexter Bell, Roman King, Ricky Lamar, Kerrick Williams, to make that final drive a success, and of course the offensive line to make it happen. It was just a great moment.”

Shaver and the community are expecting a historic crowd for Friday night.

“The support this season stands for a lot of Goshen, but also as Pike County as a whole,” said Shaver. “The schools are divided by areas and towns, but whenever one is still in it like this, we kind of all pull together, to support that one school. It’s not just a great example of Goshen, but also of Pike County as a whole. Everyone is just really fired up to see these kids who have worked so hard possibly achieve the final goal of winning a championship for the school.”