Band of Brothers: Senior Eagles making the most out of every opportunity 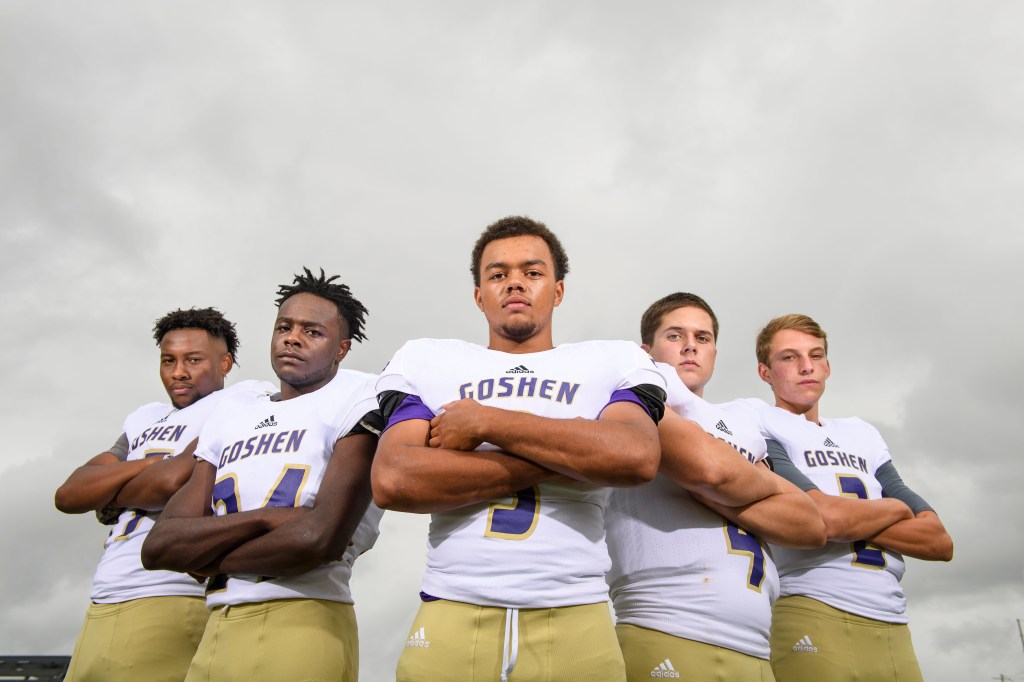 photo/Thomas Graning Goshen seniors (from left to right) Iyan Hinkle, Zack Alford, Cory peterson, Taten Phillps and Brock Snyder will all be on the field Friday night when the Eagles take on Leroy in the Class 2A state semifinals.

When the clock at C.A. Douglas Field in Theodore hit triple zeroes on Friday night, the Goshen Eagles found themselves in uncharted waters as they clinched a berth in their first ever Class 2A State semifinal game with a 56-52 win over St. Lukes.

The Eagles will return home Friday to take on Leroy at Eagles Stadium.

“It’s going to be amazing,” said head coach Bart Snyder. “We really don’t know what it’s going to be like because it’s uncharted waters. We are going to take it like any other game. It’s another opportunity to play the game we love to play.”

The Eagles entered the season with 16 seniors. On Friday night, seniors Azavion Rogers, Zack Alford, Cory Peterson and others contributed in the biggest win in school history.

“It was a once-in-a-lifetime opportunity and experience,” Rogers said. “It could have been my last game being a senior. The team fought back and didn’t give up.”

Senior quarterback Brock Snyder threw for six touchdown passes in the win including the game-winning touchdown to Alford in the game’s final three minutes.

“It was very exciting,” Alford said. “I knew I had to score, so I did. I tried my hardest.”

This team has faced their fair share of adversity this year playing in what coach Snyder believes is one of the toughest regions in the state. They faced their most adversity of the season Friday when they fell behind by 21 points early. Rogers was constantly roaming the sidelines picking up his players, knowing they were going to come back.

“It still shakes me today,” Rogers said. “It was very exciting. You always want to be a part of those big comebacks where everyone is counting you out except your teammates.”

This week, the excitement level ratchets up to a new level. Goshen fans headed south last week by the busload. This week with a home game, the Eagles are expecting an exciting atmosphere.

“We do it for the fans,” Alford said. “They come out to support us, so we have to give something back to them.”

Even though there is a lot of excitement, it is still business as usual for the Eagles.

The seniors are playing for their high school careers. They know that with their next loss their season comes to an end; but more importantly, their journey with their teammates will also come to a close.

“We have been playing for each other for a long time,” Alford said. “We have been winning since we were little.”

For Rogers, he could think of no better way to end his career than a trip to Tuscaloosa.

“It would mean more than anything because not that many people have done that,” Rogers said. “It also shows how much we have worked since the seventh grade.”

“It’s going to feel good because we may not be able to play the game of football anymore,” said JaQuentin Daniels. “It’s the game we love, so it would feel really good to go to Tuscaloosa and win it.”

Kickoff between the Lions and Eagles is scheduled for 7 p.m.