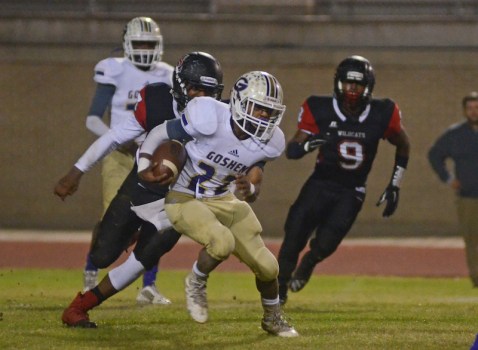 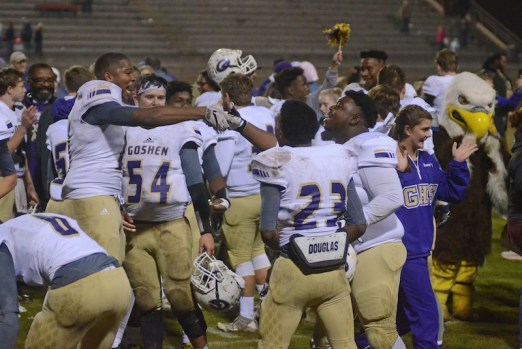 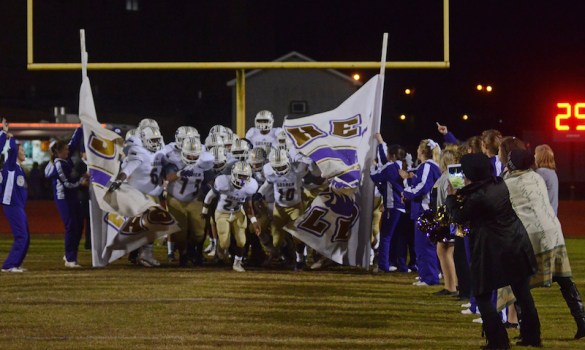 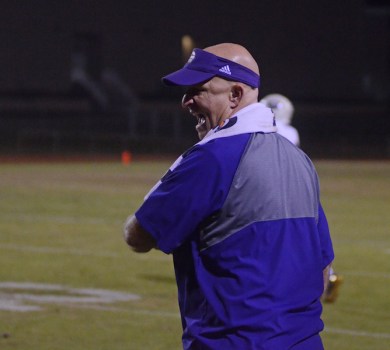 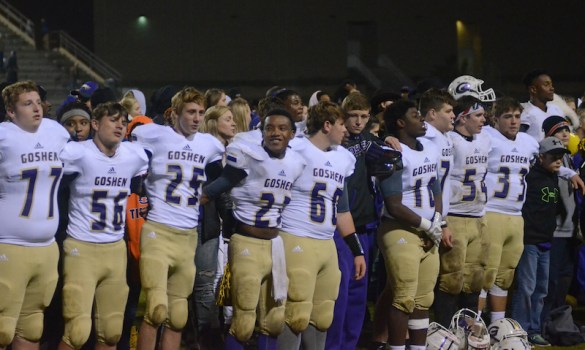 The Goshen Eagles overcame a 21-0 deficit to defeat the Saint Luke’s Wildcats 56-52 in a crazy finish to the quarterfinals of the Class 2A State playoffs in Mobile on Friday night.

Zack Alford hauled in a 42-yard touchdown pass to give the Eagles their first and only lead of the game with 2:51 remaining in the game.

The Eagles struggled stopping St. Luke’s quarterback Jermaine Brown all night long, but they held him down during the final drive to secure the win.

Brown finished the game rushing for 459 yards on 24 carries and had six touchdowns.

The Eagles found themselves down 14-0 before running a single offensive play on Friday night.

The Wildcats took the opening possession 50 yards to score the first points when Brown called his own number and ran it in from 35 yards out to give St. Luke’s the early 7-0.

The Eagles fumbled away the ensuing kick to give the Wildcats possession deep into Goshen territory.

Brown scored his second touchdown of the half on a 6-yard run to put the Wildcats up 14-0 with 8:13 remaining in the first.

Brown provided the show in the opening half. He gave the Wildcats a healthy 21-0 lead with a 35-yard touchdown run with 2:03 remaining in the quarter.

The Eagles didn’t go away. On their next drive, Iyan Hinkle hauled in a 46-yard touchdown catch thrown by Brock Snyder to put Goshen on the board.

Midway through the second quarter, the Wildcats regained their 21-point advantage on a one-yard touchdown run by Brown, his fourth touchdown of the half, to give St. Luke’s a 28-7 lead.

With things looking bleak late in the second quarter, Snyder and the Eagles brought the Goshen fans to their feet. Snyder connected with Rogers to make it 28-14, a score that would hold until the teams went into the locker room at halftime.

The teams traded blows in the second half. The Eagles took their first possession 59 yards on five plays ending with an 8-yard Damion Passmore catch to bring the score to 28-21.

The Wildcats immediately answered on their first play when Brown scored from 80-yards out to give the Wild Cats a 14-point lead at 35-21.

The volley continued during Goshen’s next drive when Cory Peterson took a Snyder pass 38 yards for another touchdown completion to bring the score to 35-28 with 7:49 remaining in the third.

Brown was back at it on the Wildcats next possession. He called his own number and took it 67 yards for his sixth touchdown of the game to make it 42-28.

With just under 4 minutes remaining in the third, it Was Snyder that showed off his legs when he scrambled for a two-yard touchdown run to once again pull the Eagles to within 7 at 42-35.

Snyder finished the game completing 16 of his 30 passes for 399 yards and accounted for all seven of Goshen’s touchdowns.

Not to be outdone, Brown was back at it on their next drive when he scored touchdown number seven to increase the Wildcats lead to 49-35.

For the first time in the second half, an offense was held off the scoreboard when Snyder had his past intercepted.

After holding the Wildcats on the ensuing possession, the Eagles got back within seven on a 47-yard touchdown catch by Rogers that brought the score to 49-42 with 8:14 remaining.

With less than six minutes remaining in the game, the Wildcats looked to put the game away when they converted a 25-yard field goal, putting them up by 10 at 52-42.

Alford got the Eagles faithful on their feet on the very first play of the next drive though when he took an Snyder pass 52 yards to bring the Eagles to within three at 52-49.

Alford wasn’t done. With 2:51 remaining in regulation, he took a Snyder pass 42 yards for a touchdown to give the Eagles a four-point lead.

Alford finished the game with four receptions for 118 yards and two touchdowns.

The defense came up with a rare stop to secure the Eagles win.

With the win, the Eagles will host Leroy on Friday night for the right to play in the state championship in Tuscaloosa.

“We are in unchartered waters in Goshen,” Snyder said. “We got the fourth round and they are coming to Goshen.”