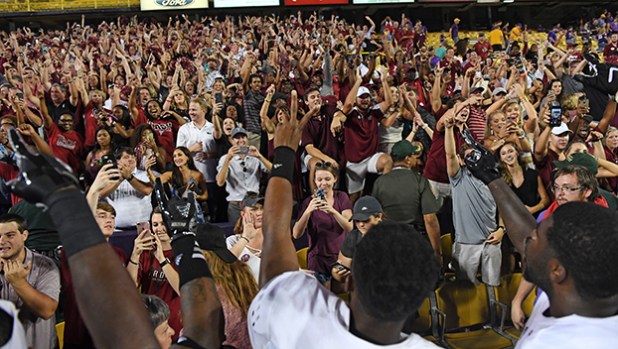 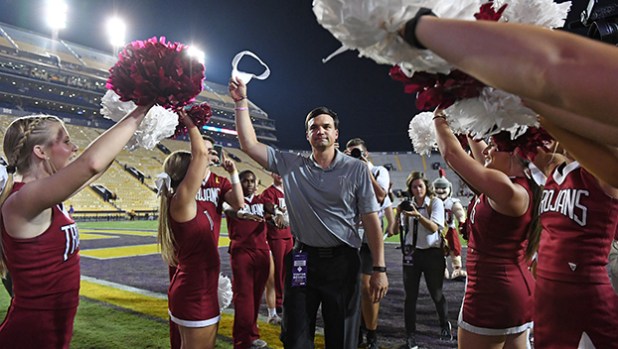 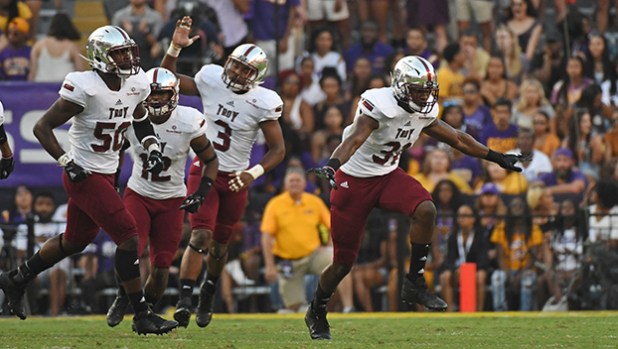 Troy linebacker A.J. Smiley (31) celebrates after an LSU turn over on downs during the first half of an NCAA college football game in Baton Rouge, La., Saturday, Sept. 30, 2017. (Photo/Thomas Graning) 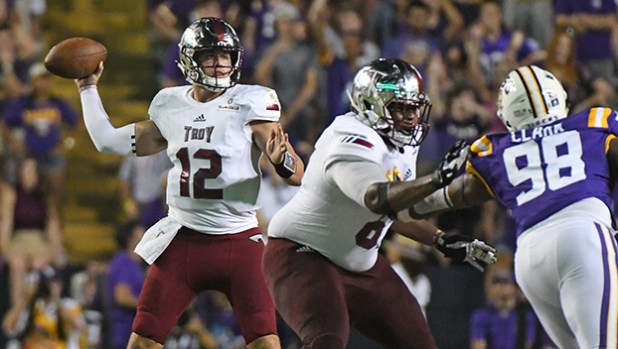 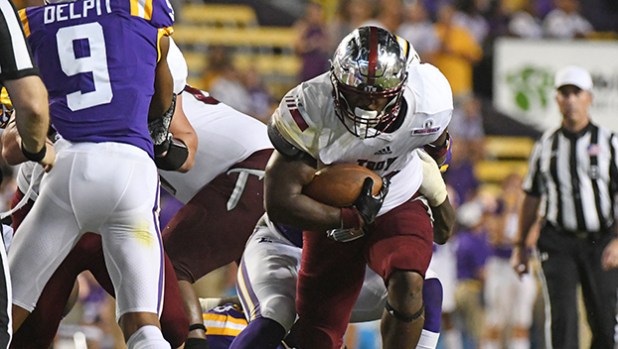 Troy running back Jordan Chunn (38) looks for room to run during the second half of an NCAA college football game against LSU in Baton Rouge, Louisiana, Saturday, Sept. 30, 2017. Troy won 24-21. (Photo/Thomas Graning)

Third time was the charm on Saturday night when the Troy Trojans knocked off the No. 25 LSU Tigers in Baton Rouge.

The Trojans took the Tigers to the wire in both 2004 and 2008 before ultimately falling. On Saturday they finished the job.

The Tigers hadn’t lost a non-conference home game since 2001.

The Trojans led by as many as 17 points over the Tigers when Jordan Chunn ran from one yard out to put the Trojans up 17-0 early in the third quarter.

Chunn finished the game with 191 yards on 31 carries with one touchdown.

The Tigers took the opening kick of the night, but fumbled on the opening snap giving Troy possession. Silvers capped off the drive with a one-yard touchdown run to put Troy up 7-0.

The game looked to go into the half with Troy leading 7-0 after the clock ran out following a completion by John Johnson inside Tiger Territory. Following a review, the Trojans were given two seconds. Evan Legassey knocked in a 37-yard field goal to give Troy a 10-0 lead at the half.

Troy extended the lead to 17-0 with Chunn’s touchdown.

The Tigers cut into their deficit with a 7-yard touchdown completion to Foster Moreau to bring the score to 17-7 with 4:00 remaining in the third quarter.

As the game transitioned to the fourth quarter and Troy still in control Josh Anderson punched it in from seven yards out to increase Troy’s lead back to 17 at 24-7.

The 25 ranked team didn’t go away. With starting quarterback Danny Etling, who sat out the third quarter, back in the game, the Tigers pulled to within 10 points on a 34-yard touchdown completion to Russell Gage.

LSU attempted an onside kick, but Troy jumped the route. After Chunn’s second fumble of the game deep in Tiger territory, LSU went down the field and got to within three on Mareau’s second touchdown of the game.

After another failed onside kick attempts and a defensive stand, the Tigers had one last chance when they took over on their own nine with 18 seconds left. After a lengthy completion, Blace Brown picked off an Etling pass to secure the win for the Trojans.

The Trojans will be back at home on October 11 against South Alabama.