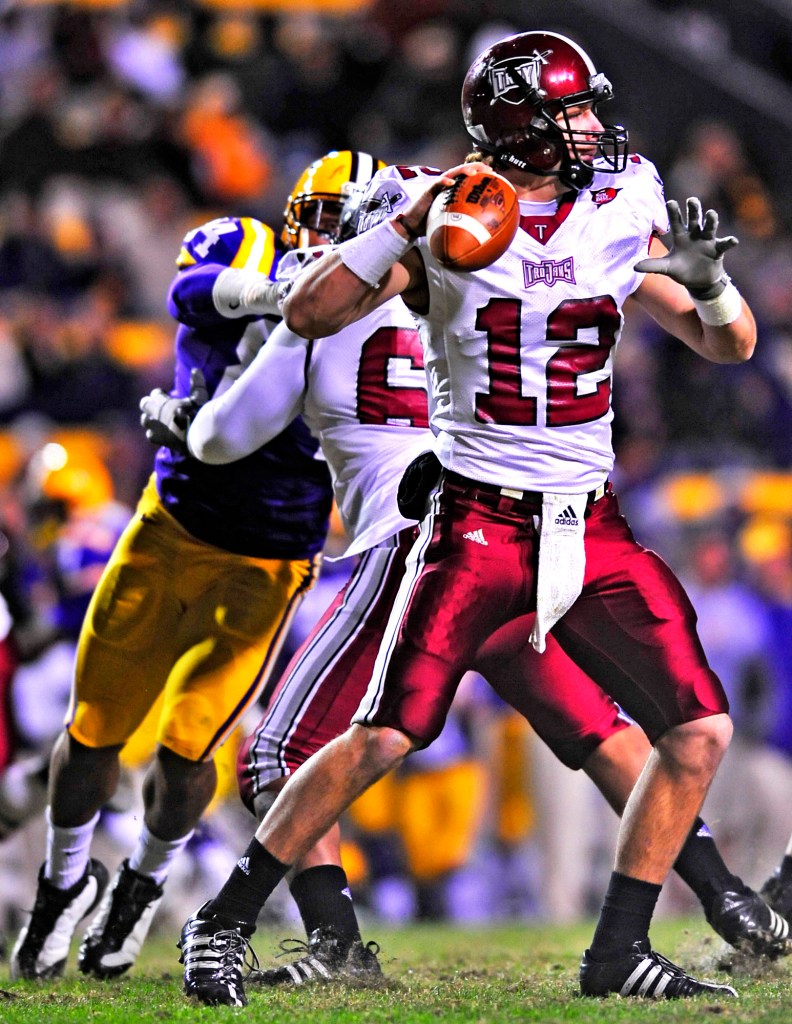 2008 Troy quarterback Levi Brown gets set to throw a pass against LSU on November 15, 2008. Brown and the Trojans led the Tigers 31-3 late in the third quarter before allowing 37 unanswered points.

The Troy Trojans look to knock off nationally ranked LSU Saturday evening in front of a national audience. The Trojans had the same opportunity nearly nine years ago and it’s a memory that for many that is hard to forget.

On November 15, 2008, the Trojans stormed out to a 31-3 lead late in the third quarter over the vaunted Tigers on a cold Saturday night in Death Valley. The LSU faithful gave up and begun heading for the exits. From that point on the Tigers outscored the Trojans 37-0 in just over a quarter to come back for a 40-31 win.

“It sucked,” said quarterback Levi Brown. “I think we were up 31-3 with a couple minutes left in the third and they scored 40 points in the fourth quarter – something like that. It was rough.”

The Trojans rolled into Baton Rouge for a game that was originally scheduled for earlier in the year, but was delayed until mid-November due to weather.

“It was a really cold night that night and they (LSU) weren’t real fired up about being there,” said current head coach and former offensive coordinator Neal Brown. “They were coming off the national championship the year before. That game, people forget, was rescheduled. A hurricane (Gustav) came through and cancelled the game.”

The Trojans arrived in Baton Rouge with a 6-3 record, while the Tigers limped into the contest after losing two of their previous three games including an overtime loss to Alabama the week prior.

The Trojans’ gameplan entering the game was simple: they wanted to pass the ball.

“We had a good plan going into that game,” Neal Brown said. “We obviously should’ve won the game. They were better than us, let’s not kid ourselves. Our quarterback Levi Brown played extremely well. Jerrel Jernigan was one of the best players, if not the best player on the field that day. In the second half, we just dropped the football. We weren’t able to run against them, that’s why we threw the ball 71 times.”

Levi Brown completed 34 of his school record 72 passes for 316 yards and two touchdowns.

“I hadn’t realized that I threw it that many times,” Brown said. “It was a lot, but you really don’t think about that stuff during the games. I was very surprised when I saw 72 attempts; that’s a lot.”

While LSU had the more talented roster that day, the Trojans weren’t without talent. The Trojans had three future NFL players on the field that day.

“If you think about it, too, we had an NFL quarterback, Levi Brown, We had an NFL player at receiver in Jerrel Jernigan, an NFL running back in DuJuan Harris,” Neal Brown said. “We had some really good players. We had a little bit of an older group on the offensive line. Levi played extremely well. He and Jerrel played at an elite SEC level that night.

Jernigan led the team in receptions with 10 for 63 yards, while Harris picked up 65 yards on the ground and picked up a receiving touchdown.

The Trojans could not put the game away in the fourth quarter that evening. According to Levi Brown, it wasn’t because of the play calling.

“A lot of people have said that,” Levi Brown said. “I look at it like coach Brown was calling the same plays that got us to that point. It’s not the play calling that cost us to lose that game. We had several dropped balls and normally routine plays that the team that I was on in 2008 would make 99 times out of 100.”

“As well as we played for two and a half quarters, we had a lull through the end of the third into the beginning of the fourth where we just didn’t catch the ball,” Neal Brown said.

After the loss, the Trojans went on to claim their third Sun Belt Conference championship with a 7-1 record in conference play and went on to represent the Sun Belt in the New Orleans Bowl.

Even though the game ultimately left a sour taste in Levi Brown’s, mouth there are still some good memories from that cold night in November.

“It was a fun experience,” Levi Brown said. “I was excited about going there and playing. I think the rest of our team was too. Obviously we played really well for almost three quarters and played really bad for a little over one quarter.”