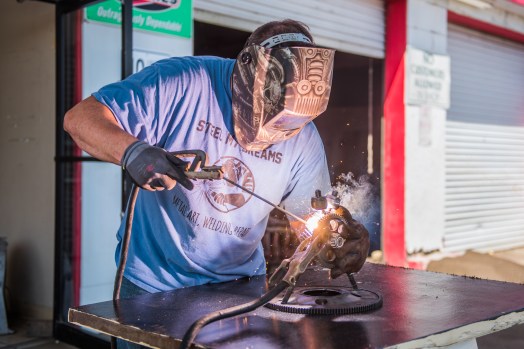 Messenger photo/Jonah EnfingerNicholas Drivas of Steel My Dreams welds some scrap pieces he found lying around his shop into a unique business card holder Friday, August 25. 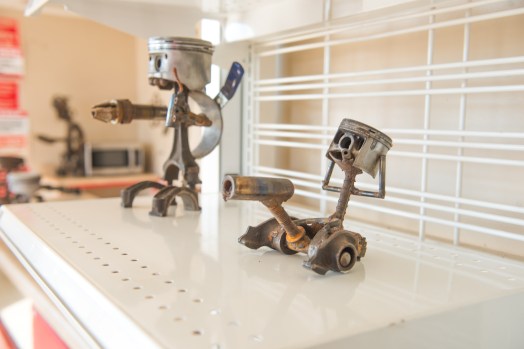 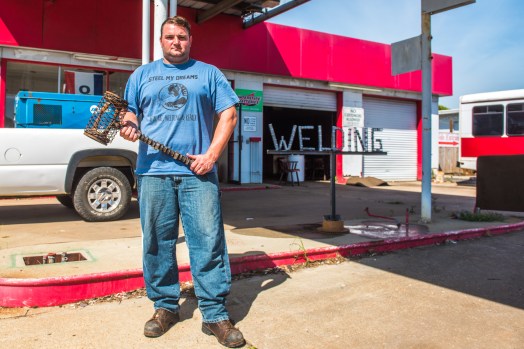 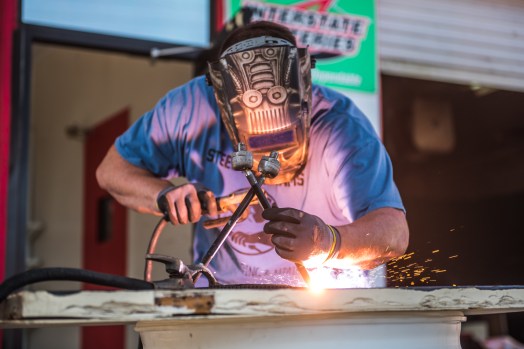 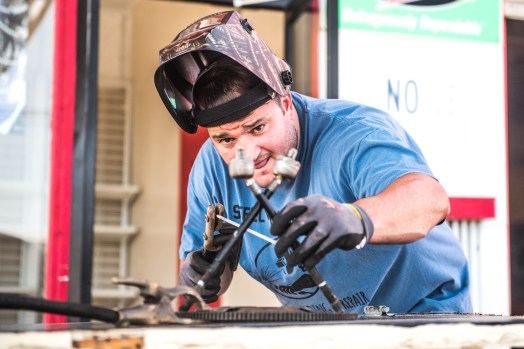 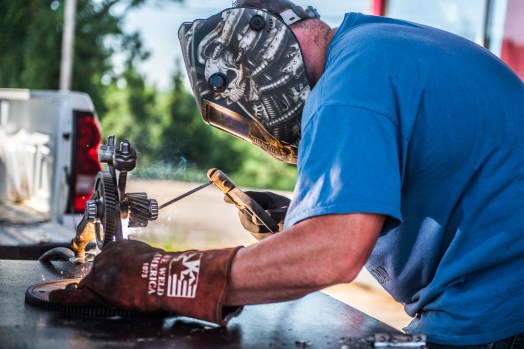 Growing up, Nicholas Drivas didn’t love metalworking. “I hated it as a kid,” Drivas said. “I was working all the time. But now whenever something has happened, I’ve always had something I could do.”

This week, Drivas officially opened his own full-time metalworking shop, and he loves every minute of it. “This right here is so relaxing,” he said.

Of course, as a kid, his metalwork wasn’t about the artful repurposing of steel and old pistons. Back then, working with his father and grandfather, it was all just work.

When he grew up and got out on his own, Drivas tried all kinds of jobs, but Drivas said nothing ever really fit for him.

“I just don’t think I was meant to work for anybody,” Drivas said.

But back in 2012 when Drivas found himself without a job, he turned his attention to a more unique way to channel his talents.“It started with making designs out of horseshoes,” Drivas said.

Over the next three years, Drivas would continue to work other jobs and only weld on the side, but by 2015, he was doing enough welding that he envisioned making it a full-time job.

He continued working though until just this year, when he was again put out of work. With no job left to cling to, he dived in to his welding. One moment convinced Drivas he could really continue on this path.

Since then he’s been working on a way to continue doing what he loves while supporting a wife and six kids.

That is why he moved his shop from his home, which lays off the beaten path in Pike County, to a former gas station on U.S. Highway next to the Double Branch.

The move wasn’t to sell his art– Drivas said that’s mostly sold online to people outside of the county as far as France and Chile. The shop is to catch traffic and advertise his service rebuilding trucks and trailers. “I have to do that to fund this,” Drivas said.

As for generating revenue off his art, Drivas said he spends one to two hours a day marketing himself and makes trophies and other simple items that are easy sellers. He has also reached out to the movie industry, directly messaging various directors hoping to get a shot making movie props. “I’m just a nobody looking for a shot,” he said.

He couldn’t go into too much detail, but one director messaged him back. The project is under wraps, but Drivas could talk a bit about the scene he’s involved in.

“I’m making a smashed up truck that will be used in one scene hitting someone in the road,” Drivas said. “I told the director it would be cheaper if I could be in the movie; so I got a role driving the truck too.”

Drivas said he hopes this opens up other doors for him in the movie industry.

“I got some scrap parts one day and I was just playing around and I thought ‘Hey, that looks like a sword.’ So I made a sword,” Drivas said. “Then someone would say ‘That’s cool. Can you build a battle axe?’ And I said ‘Sure.” So I built that.”

However the ideas come to fruition, once he gets an idea in his head, Drivas said it sticks with him until he can get started on it.

Drivas credited his family for giving him the support he needs to do what he does.

“My wife Dee being on my team changes everything,” Drivas said. “She is always supportive of what I do. I’ll be up at night and bounce suggestions off of her. And my kids love it; they want to come work here. My first two want to weld for sure.”

Drivas’ kids range from 2 to 15, and having them around the shop can be a handful, but he says he’s happy to have them along and taking such an interest in what he’s doing.