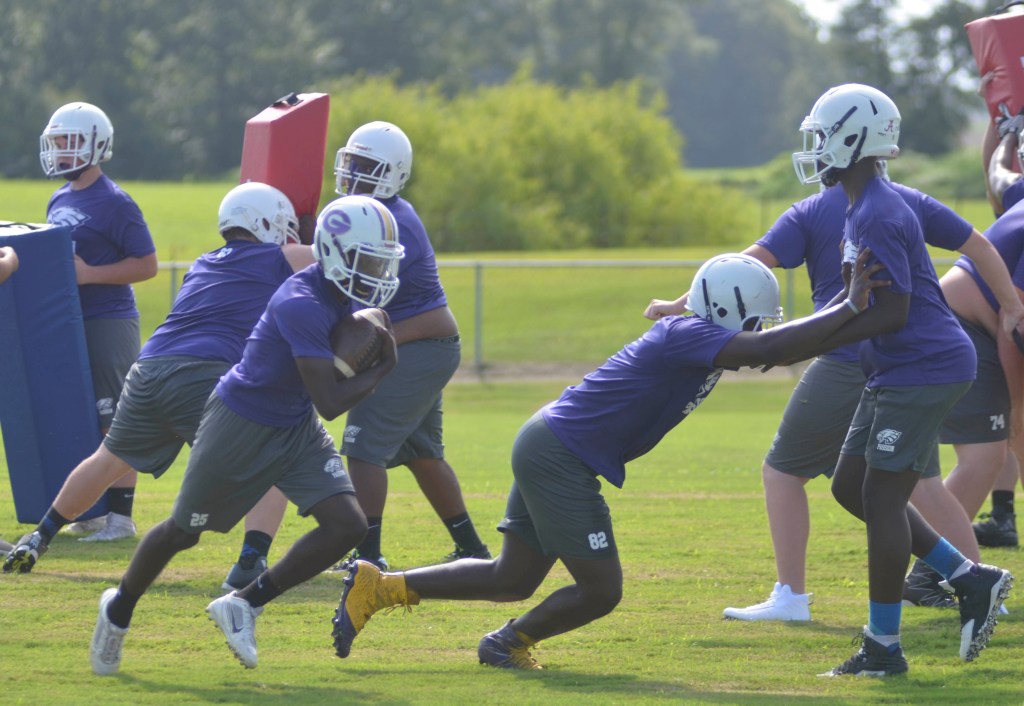 Messenger Photo/Mike hensley The Goshen Eagles hit the field this evening in Elba in a jamboree along with Elba, Wicksburg and G.W. Long.

The Goshen Eagles will see their first competition Friday night when they team up with Elba to take on G.W. Long ad Wicksburg in a Jamboree in Elba.

While a lot of teams will play more of a traditional style game this evening the Eagles are happy to line up and play a different opponent in live action.

“It’s very exciting,” said Eagles head coach Bart Snyder. “The guys are excited about doing it. They have been pushing and hitting on each other for the last three weeks so it’s time to take what you learned and put it in a game.”

The Eagles will line up and either Wicksburg or G.W. Long on offense while Elba plays the other team on defense for a quarter. Elba and Goshen will switch between offense and defense each quarter.

The Eagles enter the season with a lot of excitement and expectations after they once again made a post season run a season ago. With a lot experience returning the Eagles set out to claim a region championship in 2017. To do that the Eagles knew they had to have a productive summer.

“It’s been really good,” Snyder said. “The kids have worked really hard. We have had a few extra players. It’s been exciting out here and we just hope we can build off the excitement and make it a successful season.”

The Eagles will be going up two teams in G.W. Long who finished 12-1 last season and Wicksburg who went 8-4.

“They will see where they measure and see where they are against two very good ball teams,” Snyder said. “Even though it’s a half game, but to play to great opponents gives a good measure of where we are and what we need to do.”

The Eagles will team up with Elba, a team they will be battling against all season long for a region championship. Snyder is not concerned about opening up his playbook in front of a region rival.

“By the time we play them they will have seen what we run and vice versa,” Snyder said. “A good thing is we are not playing each other (tonight) so that helps that we are on the same side.”

Friday night’s contest is all about getting meaningful playing time for everyone on the roster.

“We are planning on getting in as many as we can to measure what and who we need to be in certain places,” Snyder said. “We want to see effort and if we can execute like we are capable of doing.”