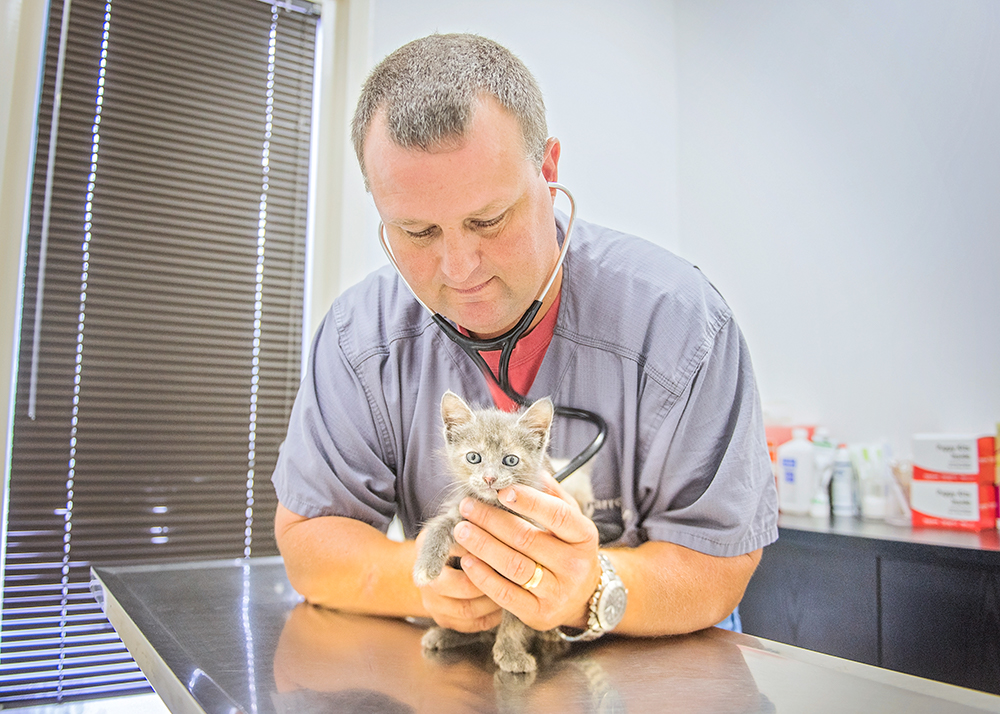 Messenger photo/Jonah enfinger When Steve Barron, above, decided to open his own practice after 19 years, he knew he wanted to offer both veterinary care and a boarding service. In January, he did just that with Southern Animal Hospital and Pet Resort on U.S. Highway 231.

After 19 years as a veterinarian, Steve Barron says it is as important to treat the people with care and compassion as it is the animals.

“People love their pets,” Barron said. “It’s equally important to treat them well as with the animals.”

After serving as a vet for 19 years in Enterprise, Montgomery and Troy, Barron decided to open his own practice in his hometown. So in January, he officially opened the doors to Southern Animal Hospital and Pet Resort.

Barron said the boarding services were lacking in Troy and are in high demand among pet owners.

“I’ve kind of known for several years that boarding was something that needed to be  offered,” Barron said. “And people want nice boarding, so here they’re kept in a room and not a cage. That’s what people are desiring.”

Barron said he also has a fenced in play area so that the pets can get plenty of outside playtime. “The pets are pampered,” Barron said.

During Barron’s 19 years in the field, he says he has treated many different animals including cows, horses, goats, a goose, many chickens, hedgehogs, rabbits and so on.

Barron got his start working with large animals, but he said customers seeking treatment for unconventional pets like that should call the office and see about working something out.

“We’re just not set up to work on large animals like cows here,” Barron said.

Barron also has a few animals that he absolutely won’t treat. “No snakes, no spiders and no monkeys,” Barron said.

When it comes to treating different kinds of animals across the spectrum, Barron said the biggest difficulty to treatment is size and understanding their differing metabolic systems. If he doesn’t immediately know the answer, he can always go back and reference his library on different animal diseases.

If he still can’t help, he also refers out to colleagues that can find the answers.

Although Barron treats animals, he said his facility functions much like a human hospital.

“We have gas anesthesia here very similar to what they use on humans,” Barron said. “We’re also the only veterinary practice in Troy with an ultrasound.” Barron is also an orthopedic surgeon.

Barron said the biggest problem he has seen facing the local area is overpopulation of stray dogs and cats.

“It’s terrible in Pike County,” Barron said. “We do a significant amount of spays and neuters.”

Barron said high rates of Parvo and heartworm are both results of the stray population.

Barron credited his staff and family for the success the office has enjoyed thus far.

“I have a great staff and my family is instrumental,” Barron said. “My wife and all four of my kids come to help a lot.”

When he’s outside the office, Barron said his life revolves around his family.

“Which is mostly a lot of baseball and softball,” Barron said.

Barron has coached his two oldest sons, Clay and Trevor, both 16, since they were 4 years old in the Troy Recreation Department league, and has also been active in the sport with his son Luke, 10, and daughter Alissa, also 10.