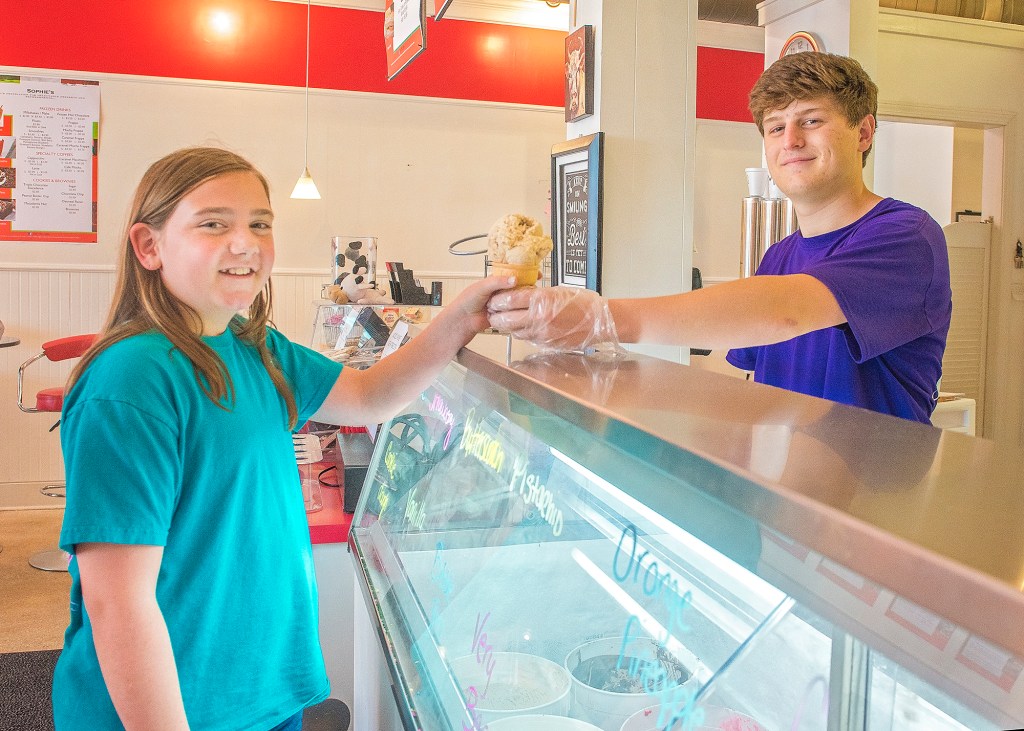 Messenger photo/Jonah Enfinger After treating residents to sweet treats for the past six years, Milky Moo’s is no more. Instead, the management decided to turn the restaurant into their own ice cream shop free of restrictive franchise agreements. The ice cream shop hasn’t changed much since becoming Sophie’s, but the owners are relishing the chance to finally do things their way. Above, Madison Bassett buys an ice cream cone at the new restaurant.

There’s a new restaurant on the downtown square– in a way. The restaurant formerly known as Milky Moo’s is no longer connected to the chain, but manager Felicia Meek said the concept will remain the same.

The restaurant isn’t just going through a name change; Meek and owner Patti Davis, Meek’s mother, decided to part ways with Milky Moo’s after six years under their franchise tag.

“Our contract was up and we had an opportunity to do whatever we wanted so we chose to make it our own business,” Meek said. “We can make our own menu and decorate however we want now. It’s really restrictive to be a franchise.”

Meek said the restaurant has already added some new sandwiches and tweaked the menu, but is still basically the same restaurant operating outside of the Milky Moo’s franchise.

So far, the restaurant has relied on social media and word of mouth to get the word out there about the change-up.

“When someone will call in I’ll say ‘Hello, thank you for calling Sophie’s’ and then they’ll say they were trying to call Milky Moos and I can explain the whole process to them,” Meek said.

Milky Moo’s has become a staple in the community after opening six years ago off U.S. Highway 231 before making the move downtown. Meek said it hasn’t always been easy during that time.

“When we got into the franchise we had no idea what we were doing,” Meek said. “It wasn’t as fun as we thought it was going to be because we couldn’t do everything we wanted to do.”

The idea to let the franchise contract expire and become a new restaurant was born about a year ago, Meek said.

While the management is looking at changing things up, Meek said customers will continue to get the same overall atmosphere.

“We’re sticking with the cow theme,” Meek said. “As far as furniture and colors, we’re thinking we want to incorporate some blues or greens. We just wanted to get opened up as Sophie’s and make changes gradually.”

As for the new name, Meek said it was chosen to evoke family, as the restaurant is a family business.

“We’re families serving families,” Meek said. “That’s why my mom decided to name it Sophie’s, after my (future) daughter.”

Meek said the ice cream will continue to be made in-store and the restaurant is free to continue selling the same flavors they always have.

One thing that management has tossed around the idea of is incorporating alcohol into the restaurant now that they are a free business, but ultimately decided against it.

“We were thinking about offering alcohol to incorporate everybody and not just kids, but the more we thought about it seems too far off from what we do,” Meek said. “So alcohol is a no.”

Sophie’s will continue to run at the same hours and is at it’s same location on the downtown square.