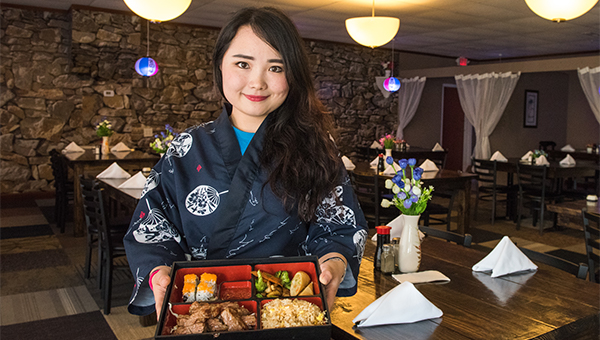 Messenger photo/Jonah Enfinger Amy Hu, owner of Trojan Teriyaki and Hibachi House, shows off a “Bento Box” from the lunch menu. Hu has requested a restaurant liquor license to be approved by the Troy City Council, but councilman Greg Meeks is asking the council to consider an ordinance that would keep restaurants within 500 feet of a church or school, like Hu's, from selling alcohol.

She first lived in New Jersey to get her master’s in business from Rutgers University.

So how does a Chinese immigrant that  gets a degree in New Jersey end up the owner of a Japanese restaurant in Troy, Alabama?

Troy University is the answer.

Hu was hired on as a graduate assistant at Troy University and she says she fell in love with the South.

Hu said her friends in Troy encouraged her to open up a business.

Being from China originally, people might have expected her to open a Chinese restaurant, but Hu said she’s always loved Japanese food and decided not to face heavier competition in the Chinese food market in Troy.

“We cooked Japanese food back home and there’s a lot of competition for Chinese food here,” Hu said.

Hu said her goal was to offer something different in the market.

“Before, everyone would think Japanese food is expensive,” Hu said. “My goal was to make a restaurant that everyone can afford. A regular meal here is $8 or $9.”

Despite Troy University’s large number of Asian students, Hu said that doesn’t impact sales for the restaurant very much.

The rest of the student body though is a big part of the restaurant’s demographic.

“Our location is within walking distance of the University and there are lots of businesses around here so people can come here on their lunch break,” Hu said.

Hu said this will be the only Trojan Teriyaki and Hibachi House for now, but said expansion could happen in the future.

The restaurant is located at 600 S. Brundidge St. in the building that formerly housed Shish Kabab.