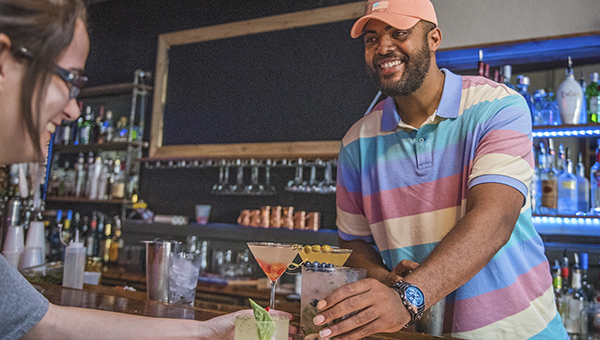 Messenger photo/Jonah Enfinger Von Ewing said it was his dream to bring a bar to his hometown, something “classy and affordable.” With the grand opening of Trojan Tavern downtown earlier this month, Ewing is now living his dream. The bar, located on Love Street next to Flo’s, serves martinis, cocktails, margaritas, mojitos, mules, draft beer and more. Customers must be 21 to enter.

Troy native Von Ewing made his dreams come true when he opened his very own cocktail and martini bar, Trojan Tavern, in downtown Troy earlier this month.

That dream didn’t come overnight though: Ewing went down an interesting path toward becoming an entrepreneur.

Ewing didn’t move to Troy until the third grade, but he said the city is home for him.

“You don’t remember much from before third grade,” Ewing said. “Troy is definitely home for me. I love Troy.”

After graduating from Charles Henderson High School, Ewing headed to Tuscaloosa on a full scholarship to play offensive tackle for the Alabama Crimson Tide, where he played from 2001 to 2005.

With his focus squarely on football, Ewing had to find a major in his junior year. After taking a theatre class that required him to have 60 hours of experience on a stage crew, he fell in love with theatre and decided to make it his major.

He eventually tried his hand at acting professionally and managed to get into the first five paid performances for which he auditioned.

Ewing continued acting for years in Florida and has performed in a total of 57 productions, including acting alongside Danny Glover in “Honeydripper.”

While Ewing loved acting, he said he had to take up bartending to help pay the bills.

“Whenever you’re acting in theatre, the money’s OK, but if you’re a survivor you’ve got to find a way to survive,” Ewing said.

So while bartending was a side job at the time, the first piece of the puzzle had come onto the table.

Ewing then went into sales with Verizon, where he eventually became the general manager of six stores in Northern Alabama.

Ewing said he enjoyed running the stores, but tired of working at the corporate level.

So with his knowledge of bartending from his time in Florida, his management skills gained at Verizon and some money he had been able to save up, Ewing set out to open his first bar.

“I knew how to make drinks and when you start a business, you want to do what’s easy for you,” Ewing said “And I knew how to manage from my time at Verizon. See how those things sort of came together?”

Immediately, Ewing had two destinations in mind: either Troy or Tuscaloosa. Although his dream was to open a bar here in his hometown, Ewing made the decision to make his start in T-Town with “Shakers on the Strip.”

“I went with Tuscaloosa because I figured it would be easier to start there, but it’s always been my biggest dream to open a business in my hometown,” Ewing said. “When the opportunity came, I took it.”

Ewing came down to 203 Love Street in the space next to Flo’s, owned by his longtime friend Ziad Rollins, and began crafting the interior of the bar.

One of the standout features is the bar itself – which has a countertop of over 400 pennies. “It’s the cheapest, best-looking countertop,” Ewing said.

The bar also has a corner stage where Ewing hopes live music will be playing nearly every night.

The tavern offers cocktails, martinis, margaritas, mojitos, mules, draft beer and more. Customers must be 21 or older to enter.

Trojan Tavern is currently open from 5 p.m. to 2 a.m. Monday through Saturday.

Ewing asks for continued patience from customers as he trains his new staff to craft the drinks, which include a variety of fresh ingredients such as blueberries, limes, basil and more.