On the pitch: Eagles soccer program brings a lot of excitment 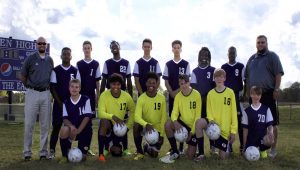 Photo/April Brown
Goshen High School has begun a soccer a program in 2017. Under head coach Jeffrey McClure, the Eagles took on Houston Academy last Thursday in their first ever game. The Eagles will take on Charles Henderson on Friday beginning at 6 p.m.

The Goshen Eagles have hit the field for their first-ever season of soccer.

After kicking the tires a year ago, the Eagles made it official with their first game last Thursday evening.

“This is something that has been in the works, at least at the student level, for the last year,” said Eagles head coach Jeffrey McClure. “There has been an interest.”

Last year the Eagles had a sign-up sheet to check the interest from students about the possibility of bringing a soccer team to the school. The initial response was a positive one for the Eagles.

“We had a good bit of interest,” McClure said. “Enough to where we could begin to explore it.”

In the fall the interest was still there, and the Eagles continued to pursue. The Eagles had to jump hurdles with the Alabama High School Athletics Association before becoming a legitimate program.

“Our school approved us in December for us to pursue it,” McClure said. “The AHSAA approved us in January. All of this happened really quickly. It has been a labor of love all fall, but once it hit, it hit quickly.”

The Eagles have a roster that consists of 15 players that features a good mix of players familiar the sport of soccer and with players that are stepping onto the pitch for the first time.

The Eagles players range from seventh grade all the way up to 12th grade and they have brought a different level of enthusiasm to the practice field.

“We have a lot of enthusiasm from the kids,” McClure said. “I have never had that much fun in practice. We have had bad weather where we couldn’t practice and they were disappointed. It makes you feel good when they actually want to be out there because it’s not easy.”

The Eagles made it official last Thursday when they traveled to Dothan to take part in their first ever game against Houston Academy. The 10-0 result wasn’t what the Eagles were looking for, but the experience of playing the game was valuable.

The Eagles have just two games remaining in their abbreviated three-game season and McClure hopes it will be a springboard into next season.

“We want to pick up where we leave off next year,” McClure said. “There are soccer camps in the area where we want to send some of younger players, where they can participate and get some experience. The only reason why we only play three games this season is because we declared so late and everyone’s schedule was full. We want to play a full schedule next year. The more they touch the ball, the more experience they are going to have.”

The Eagles will close out their season with back-to-back Friday night games against Charles Henderson beginning at 6 p.m.