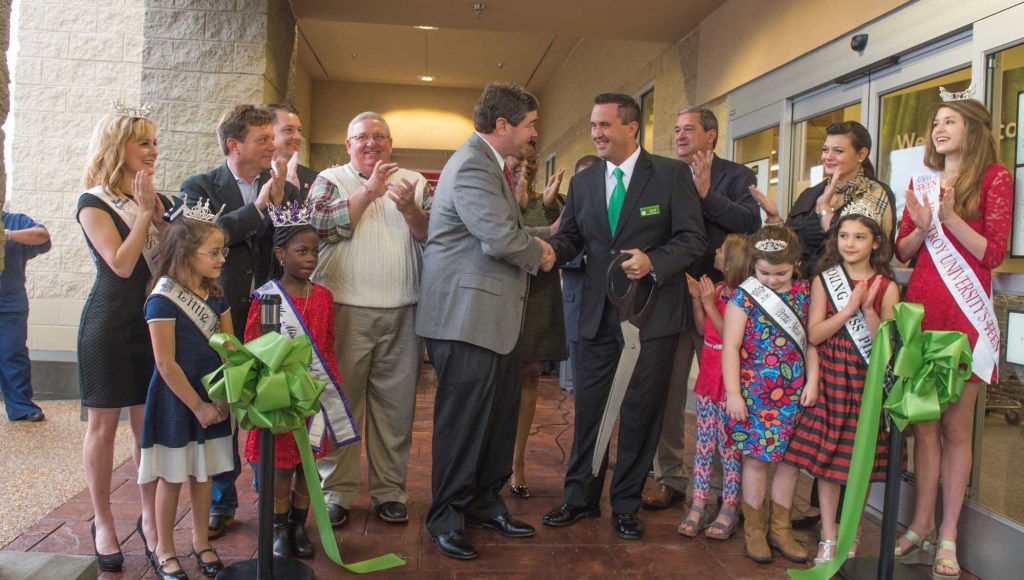 After years and years of waiting, the dream of having a Publix in Troy has become a reality.

Hundreds of people young and old lined up outside of Publix on Saturday morning eagerly anticipating the ribbon cutting ceremony and the doors on the store to open for the very first time to the public.

The earliest two people to get there waited outside for two hours to be first in line. Right behind them was a group of three Troy University students that came in shortly afterward.

They said the wait was well worth getting into the store as soon as possible.

“We were worried there would be a long line so we got here around 6:40 (a.m.),” said Katelyn Dewrell, who waited in line with friends Haleigh Mitchell and Abby Taylor. “We all have Publix back home and we love it, o we were really excited for it to open here.”

Dwaine Stevens, Publix media manager for this region, served as the emcee for the ribbon cutting ceremony. Among the people who spoke at the ceremony was Mayor Jason Reeves.

“Dwaine said this has been a long time coming,” Reeves said. “it’s been a long, long, long time coming for us. It’s rare when the government and so many individuals behind me and the private sector can work together to bring you something that you want. It took a lot of blood sweat and tears.

“It’s your store. You wanted it and you got it; and we’re glad you got it.”

Publix also kicked off its efforts to support the community at the opening, giving a $60,000 check to Pike Habitat for Humanity and donating $500 to each of the county’s four elementary schools.

“We’re excited to be here and be part of the community,” Davis said. “Troy welcomed us before we really got a chance to interact with you. We’re glad to be able to begin building those relationships.”

Finally, to much fanfare, the ribbon was cut and the people in attendance flooded into the store to be treated with free samples and many, many greetings from the staff.

As the anchor store of the development, the opening of Publix truly kicks off the Park Place development as four stores are already confirmed to be filling some of the empty store spaces connected to it.

Bill Ware, vice president of development for Harbert Realty, confirmed that Goldfingers, Marcos Pizza, Pet Sense and Nail Boutique Spa will be filling some of the spaces and that potential tenants are already being talked to about the remaining empty spaces.

Publix is privately owned and operated by its 189,500 employees, with 2015 sales of $32.4 billion. Currently Publix has 1,136 stores in Florida, Georgia, Alabama, Tennessee, South Carolina and North Carolina. The company has been named one of Fortune’s “100 Best Companies to Work For in America” for 19 consecutive years