Hale now on State Board 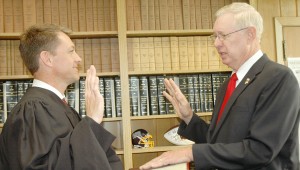 Messenger Photo/Jaine Treadwell
Judge Wes Allen administered the oath of office to Randy Hale at a ceremony at the Pike County Courthouse Thursday. hale was appointed the resident director for Pike County.

Randy Hale was recently appointed the resident director for Pike County on the Board of Directors of the Choctawhatchee, Pea and Yellow Rivers Watershed Management Authority (CPYRWMA).

Probate Judge Wes Allen administered the oath of office to him Thursday morning at a ceremony at the Pike County Courthouse.

Barbara Gibson, executive director of the authority said the board is looking forward to the important contributions Hale will make to the agency.

“Because of Randy Hale’s vast knowledge of water issues both locally and statewide he will be a value member of the board,” Gibson said. “Because of his experience with the Soil and Water Conservation District for 37 years, he will be an invaluable asset to our organization and a highly effective representative for Pike County.”

Hale said he is honored to be asked to serve on the board and is dedicated to improving the quality of the water throughout the state.

“Alabama is a rich state,” Hale said. “From 10 to 20 percent of the water in the United State flows through Alabama. We are a bio-diverse state.”

Hale said water is the major limiting factor in any growth commodity.

“Although Alabama gets about 56 inches of rainfall a year, most of it come in the winter,” he said. “When the summer months come around, we too often dry and that hurts crop production.

Hale said the CPYRWMA is challenged with improving the quality and quantity of the area’s water and has the capability to monitor rivers and predict flooding n the low-lying areas such as Geneva and Elba.

“The work the CPYRWMA has important responsibilities and I am glad to be able to make a contribution,” he said.

Hale received numerous awards and recognitions in connection with his service to various organizations including the “Service to Agriculture Award from the Pike County Farmers Federation and the Pike County Farm City Committee. He was awarded the “W. Kelly Mosley Environmental Award for Achievements in Forestry Wildlife and Related Resources.”

Hale, a native of Cherokee County, received a degree in agriculture from Auburn University. He is a member of Gamma Sigma Delta Honor Society of Agriculture. He earned the Eagle Scout Award.

He has been a member and Sunday school teacher at Park Memorial United Methodist for 35 years. He is married to Gail Helms Hale. The couple has one son, Matthew, who is a graduate of Troy University.

The CPYRWMA is a state agency established by the Legislature in 1991 and is responsible for developing plans and programs relating to water resource management in the areas of water quality, water quantity, flood control and water conservation education. It is the only state watershed management authority in Alabama.

The river basin covers 2.3 million acres in southeast Alabama and includes all portions of the counties of Barbour, Bullock, Coffee, Covington, Crenshaw, Dale, Geneva, Henry, Houston and Pike. The CPYRWMA is non-regulatory and governed by a 16-member board of directors selected from the 10 southeastern counties.

Messenger photos/Courtney PattersonBusinesses in Pike County were recognized for excellence by the Pike County Chamber of Commerce Wednesday at the... read more