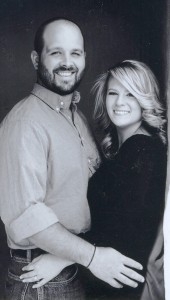 Lynlee NeCole Powell is engaged to marry Cooper Reid Nichols on May 16, 2015.

Steve and Kimberly Powell, of Alexander City, announce the engagement of their daughter, Lynlee NeCole Powell to Cooper Reid Nichols, son of James and Angie Lumpkin of Phenix City, and the late C.B. “Buff” Nichols, of Troy.

She is a graduate of Benjamin Russell High School in Alexander City and received a Bachelor of Arts in biology from Huntingdon College in Montgomery, a Master of Science in Animal Sciences and Psychology from Auburn University, and is currently attending Auburn University College of Veterinary Medicine in Auburn.

The groom is the graduate of Pike Liberal Arts, Troy and received a Bachelor of Science in Agronomy and Soils from Auburn University. He is employed by the USDA/NRCS as soil scientist in Auburn and owns Nichols Environmental Consulting, LLC. He is the grandson of Barbara Buddin and the late Larry Buddin of Pensacola, Fla. and the late Chad and Daphene Nichols of Troy.

A lack of understanding and appreciation