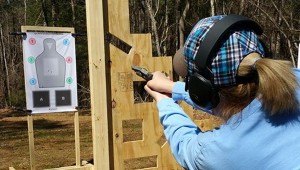 Submitted photo
Susan Newland, a student at Shady Grove Tatical, learned how to work angles while acquiring a safe and proficient shooting sight. The defense classes are designed to help people make better use of their guns.

Physically firing a gun is only about 10 percent of what defensive shooting entails, according to Jacob Fannin, owner and instructor of Shady Grove Tactical.

Fannin said besides the shooting, what was going on in a person’s mind accounts for a key element in a critical situation.

“If you can separate the emotion from the event, you stand a much higher chance of surviving,” he said. “It’s one of the biggest things that I try to teach.”

Fannin’s curriculum focuses on an understanding of how firearms work in defensive scenarios.

“The class will have skill-building exercises that will allow the students to be more familiar with methods of shooting,” he said. “We want to provide students with the physical experience of what it is like to shoot at a target in outside of the box situations.”

“The classes are geared toward defensive shooting. The reason I say that is there are two different types of shooting classes. You can go a marksmanship class, and the only thing you do is shoot at your target. It’s not gonna be like that in the real world.”

Fannin said his program aims at eliminating some misconceptions about the reality of defensive situations, making it safer for his students to use firearms to defend themselves. According to Fannin, the main goal for his class is for students to leave the class feeling more empowered about what they can do, their limitations and the things that can happen in a critical setting.

“One of the reasons I started these classes is I want to make people defend themselves with firearms more proficiently and efficiently,” he said. “And to do it with confidence.”

Fannin said he wanted to make people aware of what defensive shooting means.

“There is a big difference in knowing and understanding,” he said. “You may know about personal defense, but you may not understand all the elements that go into it.”

The curriculum also covers other details such as how to manipulate the guns when they malfunction in critical conditions.

Fannin said he started his classes because he saw a considerable interest in self-defense.

“I have been a gun enthusiast all my life,” he said. I used to work for the NRA for years, and people would come to me asking where they could learn defensive shooting.

“The skill set I have acquired over the years comes together to make these classes.”

There are also beginner classes geared toward those who have not used firearms before.

“In the (beginner class), we will look at the operation, maintenance and understanding of handguns,” Fannin said. “The other classes are a bit more advanced, for those who already know about their guns and want to be more proficient with them.”

According to Fannin, the students he has taught over the past month are a diverse group of people with different levels of knowledge about gun usage.

“I have a different approach to each student, but I still maintain the curriculum and make sure they learn the elements of defensive shooting. My job is not only to teach them what to do but why they are asked to do so.”

The students should bring their own guns and ammunition, though firearm can be on loan. Shady Grove Tactical will provide ear and eye protection, along with training target and barricades.

Fannin said the classes are the first steps of effective self-defense.

“You need to take what you learn from the class and practice it again and again in your own time,” he said. “Because when under stress, many people will revert back to the level of training.”

The classes will be held on Saturdays from 8 a.m. to noon. To schedule a class or ask for further information, contact Shady Grove Tactical at 334-268-0296.