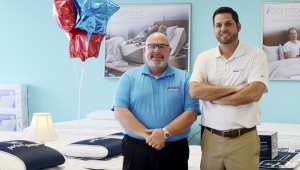 Well, that is according to Mr. Mattress, himself, Jeffrey Douglas.

Douglas is the owner for Mr. Mattress, currently residing in Enterprise, Andalusia, Crestview and, most recently, Troy.

“We have the best customer service,” he said. “We have an in-home trial for all of our beds and guaranteed lowest price on everything we have.

“We also offer free delivery on everything we sell and 0 percent financing with everything.”

Douglas opened his first store in Enterprise in 2011. He currently lives in Enterprise, but is originally from Andalusia.

“My great-grandfather had a mattress factory in early 1903,” Douglas said. He said the mattress business must be in his blood.

The new Troy store opened in February of this year and is located in Crowe’s Plaza, next to the future location of Chicken Salad Chick.

“We always are very involved in community activities,” he said. “We want to be part of the university.”

Douglas said that Mr. Mattress plans to be involved with Troy University’s athletic department and wants to take part in some events with them.

Mr. Mattress is also going to be a member of the Chamber of Commerce and is anticipating a ribbon-cutting in the near future.

Douglas prides his business on being a family business and being able to keep the money within the community instead of it going to a larger corporation.

“That’s really what we are about,” he said. “We want to keep our money in the community.”

“We don’t have some big-wig from another town telling us what to do,” he said.

“If there is ever a warranty issue or anything, I’m the one that comes out and looks at it and takes care of all the issues.”