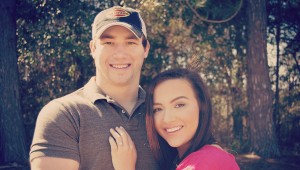 Kaitlynn Messick is engaged to marry Greg Sprinkle in April.

Anna and Bill Arrington and Reynolds Messick are pleased to announce the engagement and forthcoming marriage of their daughter, Kaitlynn Taylor Diane Messick, to Zachariah Cain Sprinkle, son of Janice Nichols of Dothan, and Greg Sprinkle of Ariton.

The bride is the granddaughter of the late Damon and Camille Harkins of Las Vegas, NV, and the late Verdure and Lila Huron Messick of Goshen. The groom is the grandson of Ingrid Richards and the late Pastor Royce Richards of Troy.

An outdoor April 2015 wedding is planned beside Byron Wilks’ pond. A reception honoring the couple will immediately follow the wedding ceremony.