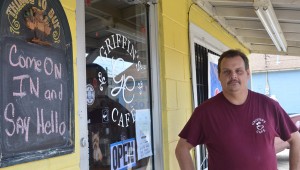 Messenger photo/ Ngoc Vo
Randy Griffin, co-owner of Griffin Cafe. Griffin and his brother welcome their customers to enjoy the cafe’s Southern homecooking and to relax, striking conversations with the restaurant staff. Griffin said he wanted diners to come as they are, completely casual.

Ever since he was 9 years old, Randy Griffin has developed a passion for food and cooking.

“My mother used to try to make bread, and it never really turned out,” Griffin said. “I think she probably didn’t have the patience to let it rise. I told myself I would make her bread one day and have it turn out the way it’s supposed to be.”

Griffin started working in the food industry when he was 13 years old washing dishes at his aunt’s restaurant.

“I did the dishes one summer and then came back to help out with other things so I could learn each part of the restaurant,” he said.

After becoming a cook, then a restaurant business manager and regional manager, Griffin now owns a restaurant of his own with his brother, Melvin Griffin.

“Having lived in Brundidge for 12 years, I noticed there is no place to eat where you can bring your family to have a home-made meal,” said Melvin Griffin.

“After I retired from Wal-Mart, my brother and I decided to open a restaurant together where people can go in feeling like they can take their shoes off and sit down to have a meal while getting to know everybody.”

Randy Griffin had the same idea for a “home-y” establishment.

“The reason we chose this place is that we wanted somewhere cozy, where people don’t have to dress up to go to eat,” he said.

“There are not many restaurants you can go and be completely casual. But you can come here after either just finishing you work on the farm or from a fishing boat or driving your truck by. Come as you are, you don’t have to freshen up.”

Griffin Café offers a down home country feel with its decorations, its radio jukebox and country music playing the background.

Randy Griffin said he wanted his customers to enjoy the feel of his restaurant where people are friendly and full of the Southern hospitality.

“We want people to come in and be a part of the family,” he said. “We want them to know who we are, who are cooking and serving them, just as we want to know who they are.”

Four out of five people who work at Griffin Café are family and Griffin said he considered the other one just like a family member. He said he wanted to treat the people who come in and dine at the café the same.

“We have quite a range of customers, from local people to those who drive by. A lot of them like the comfy, cozy atmosphere and that we all interact with them. Just because I am in the kitchen, it doesn’t mean I will not come out and check on them.”

The Southern home-cooked food at Griffin Café also plays an important part of what makes the restaurant special.

“We want to give (the customers) a chance to eat the food they cannot get any where else,” Randy Griffin said. “All of our food is made from scratch. We hand make the 7-ounce hamburger patty as the customer orders then and there.

“It’s not fast food, it’s home-cooked food. We don’t rush people in and out. We want to give them quality food and make sure that when they come in, they can take a load off and say ‘hey.’”

The café also has beef liver onions and fried green tomatoes on their special dishes.

Randy Griffin said he aimed to make the restaurant bigger but still maintain its homey elements.

“We don’t want to grow too fast,” he said. “We try to keep the feel where customers come in for friendship and to be a part of the family.”