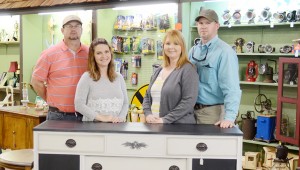 Left to right, Shane and Trudie Smith and Dan and Kristie Freeman, owners of Pickin’ & Grinin’ and 2 Sister Closet. The two businesses share a builing located on Main Street in Brundidge.

Shoppers in Downtown Brundidge find themselves “a Grinin” when they stop at Pickin & Grinin, newly located on Main Street.

Pickin & Grinin is an antique and variety store that originally opened in Oct. 2013 on Hwy 231.

Now on Main Street in Brundidge, the business is flourishing.

Shane Smith and Dan Freeman, co-owners and brothers-in-law, offer a variety of products from furniture to hand-painted art.

“We try to have an overall variety,” Smith said.

“We try to be very diverse and try to keep the market to something the average household income can afford.”

One of their more popular items is the “shabby chic” furniture.

Not only do they sell furniture, but also they will paint furniture that was purchased somewhere else or build the furniture themselves.

Pickin & Grinin offers to build items such as kitchen tables and benches, out of barn wood.

“That’s really my pay – to see that a person found something they could afford, and they’re appreciative of the work I’ve put in it,” Smith said.

Smith’s grandfather worked in retail, and he always wanted to open up a store of his own.

He began to sell items on eBay to test the waters and found that there was a high demand for the products he was selling.

Originally from Abbeville, Smith had heard that Brundidge was an antique city and decided to begin an antique business with his brother-in-law in the area.

Before they opened officially, they sold items on social media, to see how well they could do once they opened their own business.

“The business ran itself,” Smith said.

After doing well for a year on Highway 231, the two decided to move their business into downtown Brundidge in Sept. 2014.

Smith said that after their business changed locations, they were “overwhelmed with welcome” from the city of Brundidge.

While only half of the building is being used, the business continues to grow.

Pickin & Grinin houses a new business in its store that continues to keep everything in the family.

Kristie and Trudie will be offering a new line of body products next month that will carry sugar scrubs, bath salts, lip gloss and other products that will be special to 2 Sisters Closet.

“Our goal is customer satisfaction,” Shane Smith said. “We don’t want to cater to just antique buyers or to just arts and crafts…we want to have something for everybody.”