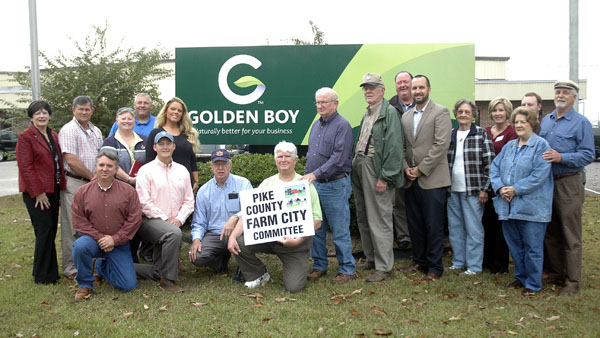 Josh Elliott, committee member, organized the tour that was designed to give committee and community members an opportunity to experience the “city-side” of Farm-City Week.

“This year’s tour will hopefully encourage and engage our committee members, as well as the community to, better understand and appreciate the relationship between the farm and city communities,” Elliott said. “Each is necessary for the other’s success.”

A group of 30 toured the Golden Boy Foods facility in Troy and probably now know more about peanut butter than the 150 million other Americans, who have a jar of the popular foodstuff in their cupboards.

Today, Golden Boy Foods, a member of the Post Holding’s family, is a leading manufacturer, marketer and distributor of Private Label and branded food products. The company has two plants in Canada, one in Washington State and the other in Troy.

Jacobs said former Mayor Jimmy Lunsford hit a homerun in the bottom of the ninth inning with two outs and the count of two strikes to bring Golden Boy to Troy.

Jacobs said the future looks bright for Golden Boy Foods in Troy with plans for expansion on the horizon.

Members of the group were interested in why Golden Boy Foods would have plants so far from peanut growing areas.

Jacobs said it is likely that some of the peanut butter made in Troy is made from peanuts grown on Pike County farms.

“We buy about 95 percent of our peanuts from Brooks so some of the peanuts could be locally grown,” he said.

Just up the highway from Golden Boy Foods, KW Container has made a name for itself, nationally and internationally, as a manufacturer of plastic paint cans.

KW Container began making containers for the paint and coatings industry in 1998 with the introduction of a hybrid container that featured an all-plastic body.

The container quickly gained acceptance by manufacturers who looked at the container not only as an alternative to antiquated metal containers, but a solution to industry concerns including container denting, product rust contamination and container leaks.

Today, KW Container is the world’s largest supplier of plastic gallon, quart, pint and half-pint containers to the paint and coatings industry.

Plant managers, Donny Berry and Jason Ash, gave the Farm City Tour group an inside look at how paint cans are made from recycled materials and shipped worldwide.

The half-pint cans are produced in 13 seconds and the five-liters cans take 15 seconds.

KW Container is locally owned, with plants in Chicago, Illinois; Allentown, Pennsylvania; and Bakersfield, California. The Troy plant employs about 100.

“Amazing. It’s all amazing,” said Tammy Powell, a veteran member of the Pike County Farm-City Committee. “The city tour of Golden Boy Foods and KW Container was one of the best Farm-City tours I have participate in as a committee member.

“All of the tours have been interesting but I learned so much about these local business that I didn’t know and couldn’t imagine. To think that products produced right here in Pike County have such a far-reach effect – all the way to China. It’s amazing that local businesses could have that kind of impact.”

Powell said she was impressed “and amazed” that she was able to eat peanut butter that was “hot off the press” so to speak at one location and drive a few hundred yards and stand beneath a mountain of plastic paint cans that were ready to be shipped all around the country. KW Container ships out 1.2 million quart cans every week.

“That’s amazing,” Powell said. “And, it’s very important to know that plastic materials that we recycle can be used right here at home to make something useful once again. What a wonderful turn around. Recycling works. If you don’t believe that, go tour KW Container.”