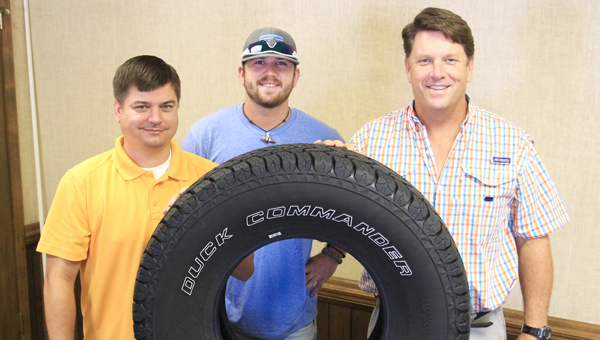 Listen up Duck Dynasty fans: soon you can deck out your vehicle Duck Commander style, thanks to a local tire manufacturer.

Harris Tire Co. has launched a new line of tires in partnership with TBC Corp., which is affiliated with the Robertson family’s Duck Commander brand. The Robertsons are famous for their popular A&E reality show “Duck Dynasty”.

There are two new lines of tires: All-Terrain and Mud Terrain, which are the first to carry the Duck Commander brand name.

Ken Harris Jr., an owner of the tire company, said some of the inspiration for the tire line came from a comment Jace Robertson said on an episode of Duck Dynasty. Robertson said, “When everything goes south, you know what will be on top of the heap? Mud Grips.”

Harris said,after hearing the comment, a light went off.

“I met with Phil about the idea and concept and told him about our family business,” Harris said. “It’s like theirs, but our warehouse is full of tires and theirs is full of duck calls.”

Harris met with the Robertsons at their home in West Monroe, La., which is featured on the reality show. In February, a license agreement was made. Harris Tire is the sole distributor for the new tire lines in the Southeast.

Cooper Tire & Rubber Co. is manufacturing the tires, which feature a feather motif printed onto the sidewall of the tire.

Harris, an avid outdoorsman, said he is glad to be able to combine the tire business with his favorite pastime.

“It’s new and refreshing to have an outdoor-sponsored tire,” Harris said.

The tire will be distributed in all over the United States and Canada. The tires will be available by October.