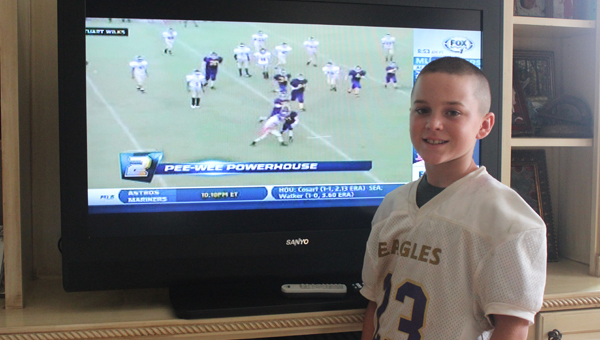 Of all the dramatic, heart-stopping plays in the sports world over the last week, only Peyton Manning’s seven touchdown performance out shined John David Taylor’s TD romp against Ariton.

Taylor, quarterback for the Goshen termite league football team, scored on a 43-yard sweep that reached national prominence after coming in as the No. 2 play of the week on Fox Sports Live’s countdown.

Taylor said the play, dialed up by his dad, was ‘Wishbone fake 36, 18 flats’ and wanted to make a play happen. Taylor ran through a tackle at the line of scrimmage, juked by a host of defenders on the sideline, and stiff-armed a man down the boundary en route to his long score.

“Ariton has a really good team, and their No. 11 had been making a lot of plays,” Taylor said. “I saw he was coming at it immediately hit me that I had to do something. I am just glad it worked out.”

Despite the ending result, the play almost never came to be. John David’s father, David Taylor, made the play call, which wasn’t well received by the quarterback.

“He told me ‘Daddy, that ain’t going to work,’” said David. “He made something happen on that play, but for the majority of the game the blocking was fantastic, and he knows that.”

The play beat out several college plays, and a touchdown run by NFL great Adrian Peterson to make the runner-up spot on the countdown.

Goshen Peewee Association president Curtiss Shaver said that the exposure the league has received in the last few days has been phenomenal.

Despite the spot on national TV, John David said that he is more concerned with what is in the future.

“My goal is to win the league Super Bowl,” he said. “Then I can celebrate with all my teammates.”