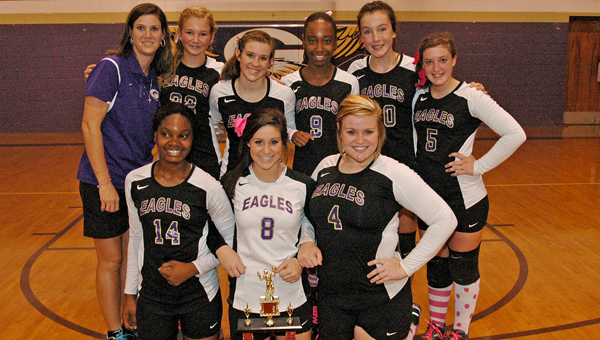 The Eagles got off to a sluggish start but did just enough to split the first two games.

Goshen, who trailed early in every game, fell behind 18-21 before hitter Ivia Pollard slammed a kill to bring the Eagles to within one, 21-22.

Goshen would tie the game at 23-23 before two Highland Home double contact calls gave the Eagles a 25-23 win.

Trailing 7-11, Goshen put together a nice rally before Casey Allen finished with a kill to swing momentum back to the Eagles.

“Momentum is a huge part of this game,” assistant head coach Amy Warrick said after the match. “We have several moments where we had to win the momentum back.”

Pollard seemed to have once again helped the Eagles forge ahead as she picked up a block to bring her team to within one, 10-11.

Several service errors would cost Goshen the second game, however, 21-25.

With the match ties at one game a piece, momentum definitely swung in the balance of the third game as again Highland Home sent missiles flying on serves but a hard kill attempt was returned by Fran Warrick and the Eaglees would ultimately win the point and the game, 25-14.

The teams each saw a comfortable lead disappear in the fourth game.

At that time, coach Warrick made an adjustment that ended up paying off.

“We saw they were moving back and leaving four (front left court) open. So we changed it up a little and trying to dink and dunk them.”

The move worked as Goshen came storming back to take a 24-20 lead.

Katie Thomas served 10 consecutive times as the Eagles began to smell an a area title.

One point from elimination, Highland Home would not go down quietly.

After breaking serve, the Flying Squadron used Goshen mistakes to regain the lead 25-24.

The Eagles regained their composure and scored three consecutive points to clinch the regional berth.

“We only had two starters returning from last year so we really didn’t know what we had. Everyone did a great job of getting better as the year went on.”

For the match, Ivia Pollard led the team with nine kills, four digs and two blocks.

The Eagles will most likely travel to Leroy, who defeated Millry 3-0, for regionals.

“I believe we a more rounded team than we had last year,” Alli Warrick said. “We are quicker and see the court a lot better. I think we can make it deep into the playoffs.”