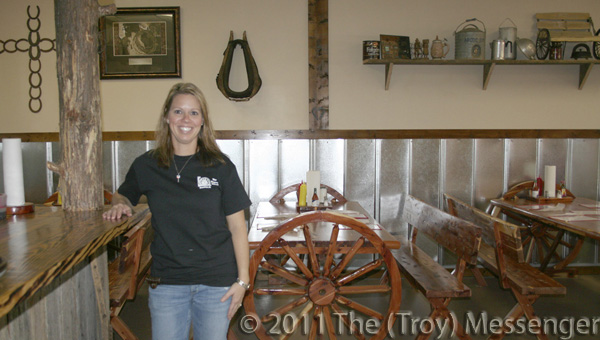 Tonya Carter and her husband, Buddy, moved their family from Florida to Brundidge and opened The Wagon Wheel, a meat-and-three type restaurant that plays on its rusthic theme and satisfying foods. (Photo/Jaine Treadwell)

Of all the places in the country, Buddy and Tonya Carter chose Pike County to make their new home and to start a new business from scratch.

When the couple decided to move from Florida with their four girls, ages 13, 12, 10 and six, they thought about different places and looked at different places, but Pike County was the place that got the nod.

Tonya Carter said she and her husband wanted to find a small place where they would feel at home but a place large enough, that there was the potential for a new business “to make it.”

“We had thought about putting in a restaurant and even talked about it but it wasn’t until we moved here that we decided to give it a try,” Carter said.

The Carters knew they want a meat-and three-type restaurant because they wanted to be able to attract the working crowd for lunch. That would be their bread and butter so to speak.

They also wanted to have a place where the early morning crowd could gather to talk about the weather, politics and everything else that is talked over biscuits and bacon.

“We thought that an oyster bar would go here and, of course, we wanted a Friday and Saturday night menu that would include steak and seafood,” Carter said. “We wanted to have a restaurant that would appeal to a lot of different people.”

And, they also wanted a place with atmosphere.

“We didn’t know exactly what until someone suggested that we visit Lawrenceburg, Tennessee,” Carter said. “We were told that the Amish there made some really impressive furniture. And, when we saw their work, everything just fell into place.”

The Carters were so impressed with the wagon wheels that the Amish craftsmen incorporated into much of their furniture that they placed an order for their “Wagon Wheel” restaurant.

“We wanted a rustic look for our restaurant and that’s what we got with their designs,” Carter said. “The Wagon Wheel Restaurant is decorated with huge cedar tables and benches and matching chairs and rockers for the porch. The tin walls hold barbed wire “arrangements” and shelves with antique bottles and farm implements. The oyster bar is straight from the cove.

The Wagon Wheel is a place where hunters and fishermen can come and feel right at home. Where the cowboy can leave his horse tied to the post and a place where kids can roam.

The Carters want everybody to feel comfortable and welcome at the Wagon Wheel, whether they’re there for grits and eggs, meat and taters or a fancy steak “supper.”

The Wagon Wheel is located behind Hardee’s and TB&T. Just look for the sign and then follow your nose.