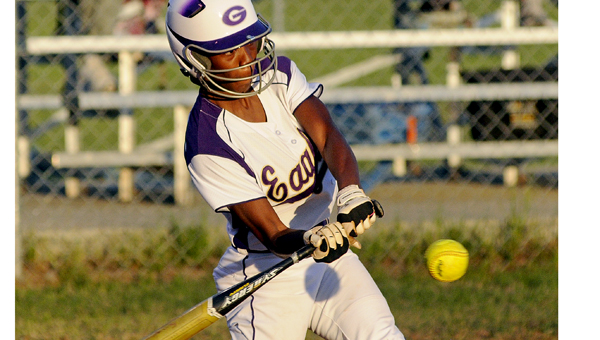 After a slow start to the season, the Goshen Eagles softball team has been on a fast pace recently.

Since last Thursday afternoon’s home opening victory over Catholic, the Eagles have play in six games, winning all but two.

This week, Goshen has taken down both Lamp and Highland Home, by a combined score of 19-3.

And now, today, the Eagles will be back in action, at home, against Georgiana.

Thanks to the recent string of games, the Eagles are currently 6-5 overall, and 1-0 in area play.

A big factor in helping Goshen get above .500 is the team’s pitching, led by junior Alli Warrick.

Against Trinity over the weekend, Warrick threw a no-hitter, as well as several one-hit and two-hit games as well.

Along with Warrick, senior Amanda Griggs has also stepped up for the Eagles, tossing a one-hitter and striking out 12 against Highland Home on Tuesday.

“Alli has seen a lot of time on the mound, but that’s because we have our best team in the field with her pitching,” Hughes said. “We are strongest when Alli is on the mound.

“She has done a great job for us this year. Right now, it’s good for us to mix it up though with some of the teams are going to be playing. We have seen some tough teams and now we are able to give Alli a break and let Amanda some time on the mound also.”

The Eagles will look to stay on the winning side of things today, at home, when it takes on Georgiana.

This will be the first of three home games in a four-game stretch, as the Eagles will take on head to Brantley on Monday, before returning home to face off with Highland Home on Tuesday and Trinity on Thursday.