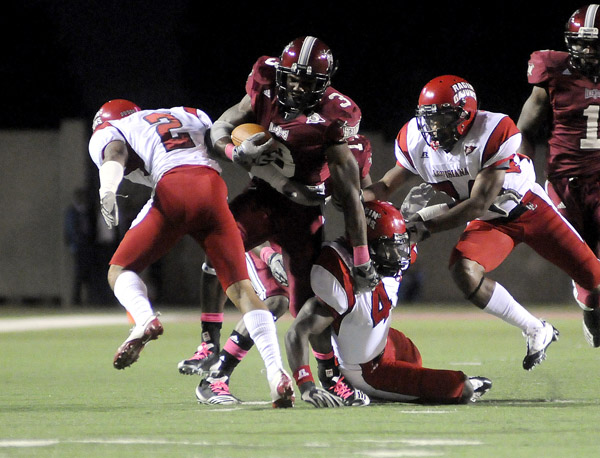 Four years ago, a 5-foot-10, 180-pound Eufaula wide receiver came to Troy looking to prove his worth after being deemed too small by bigger schools.

Now, four years later, that “small” receiver is the biggest in the Troy records books.

Coming into his senior season, Jerrel Jernigan was in sight of reaching several different receiver records and on Saturday night against Louisiana-Lafayette, he reached one of them, as he became Troy’s all-time reception leader with 216 in the second quarter of the game.

Before the 30-yard reception, the record, which was previously held by Danny Grant, stood for nearly 40 years.

However, despite all the publicity, awards and recognition the senior already has received this season, he has his mind set on what’s important – winning.

“I really don’t care too much about any of the awards or records,” he said after the 31-24 win over the Ragin’ Cajuns Saturday night.

“To break a 40-year old record of course means a lot, but all I want to do is help my team win – that’s all that really matters.”

Besides breaking records, that is exactly what the wide receiver did Saturday night.

With the game tied at 24, and the Trojans threatening inside the ULL red zone, Jernigan delivered the final blow after Corey Robinson hit him for a 12-yard touchdown pass late in the fourth quarter.

“I was surprised how wide open I was,” Jernigan said with a laugh.

That touchdown reception tied the wide out for fourth all-time on the Troy touchdown list with 16 scores.

But that was not the only time Jernigan had room to run with the ball in the game.

Along with this six catches for 77 yards, standout senior also did things on special teams, as he took a ULL punt return 75 yards to the back of the end zone to give the Trojans their first lead of the game.

“I’m proud of what Jerrel has been able to do for us,” Troy head coach Larry Blakeney said. “I’m proud to see him break one of my old buddy’s record.

“He is one of those guys that gives it everything he’s got all the time. He does so many different things for this team both on offense and on special teams. He is a big-time game changer for us.”

Earlier this season, Jernigan set a new Sun Belt career record for receiving yards in the game against Middle Tennessee State, after having surgery on his elbow just three days before hand.

“That takes a lot of guts to get out on the field after being under the knife,” Blakeney said earlier. “He is one of the big leaders on this team.”

Troy University's Jerrel Jernigan (3) returns a punt for a touchdown during an NCAA college football game in Troy, Ala.,... read more